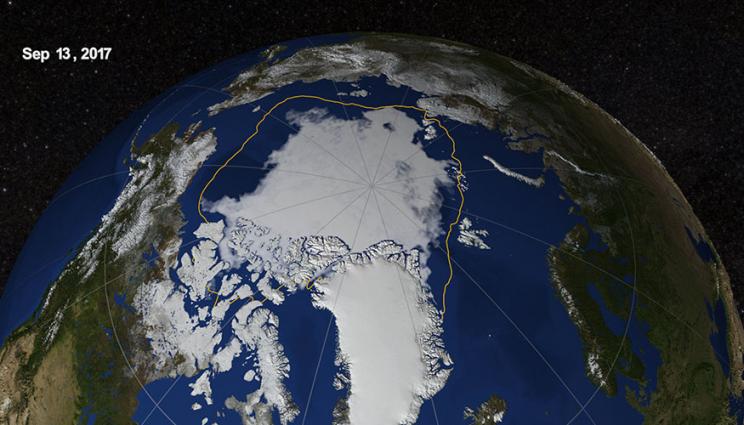 Arctic sea ice in September 2017, when the ice reached its annual minimum. In addition, a yellow line marks the 30-year average minimum sea ice extent from 1981 through 2010. Image courtesy of NASA.

Arctic sea ice loss in the last 37 year is not due to humans alone.

New research by a Lawrence Livermore National Laboratory (LLNL) scientist and collaborators show that Arctic sea ice loss is enhanced by natural climate fluctuations such as El Niños and La Niñas. With manmade greenhouse gases on top of the natural climate variability, the decrease in sea ice is even more severe than climate models originally estimated.

Using a series of climate models, the team used a "fingerprint" method to estimate the impact of natural climate variability. Natural swings in the Earth’s climate contribute to about 40 percent to 50 percent of the observed multi-decadal decline in Arctic sea ice.

"Internal variability can enhance or mute changes in climate due to greenhouse gas emissions. In this case, internal variability has tended to enhance Arctic sea ice loss," said Stephen Po-Chedley, an LLNL climate scientist and a co-author on a paper appearing in the Nov. 5 edition of Nature Geoscience.

"It is important to note that individual runs do show large changes in sea ice that are comparable to observed sea ice changes," Po-Chedley said. "In these simulations, like in the real world, Arctic sea ice loss was enhanced by natural climate variability.

"When natural variability is taken into account, Arctic sea ice loss is quite similar across models and observations."

According to NASA, the planet has been shedding sea ice at an average annual rate of 13,500 square miles (35,000 square kilometers) since 1979, the equivalent of losing an area of sea ice larger than the state of Maryland every year.

Model simulations (or "runs") exhibit a range of sea ice trends. Depending on the timing of natural fluctuations, individual model runs can exhibit greater or smaller-than-average loss. Similarly, both natural variability and greenhouse gas changes contribute to the observed sea ice loss.

"This study helps to quantify the degree to which natural and anthropogenic factors contributed to Arctic sea ice loss over the last few decades," Po-Chedley said.

The team found that enhanced ridging over the Arctic Ocean promotes warming and moistening in the lower troposphere (the lowest layer of Earth’s atmosphere where nearly all weather conditions take place), which in turn, leads to accelerated sea ice loss.  Arctic sea ice decline may be important to rainfall in California. Previous research has suggested that Arctic sea ice loss can exacerbate droughts over California.

The work was funded by NOAA’s Climate Program Office and by the National Science Foundation’s Polar Programs.