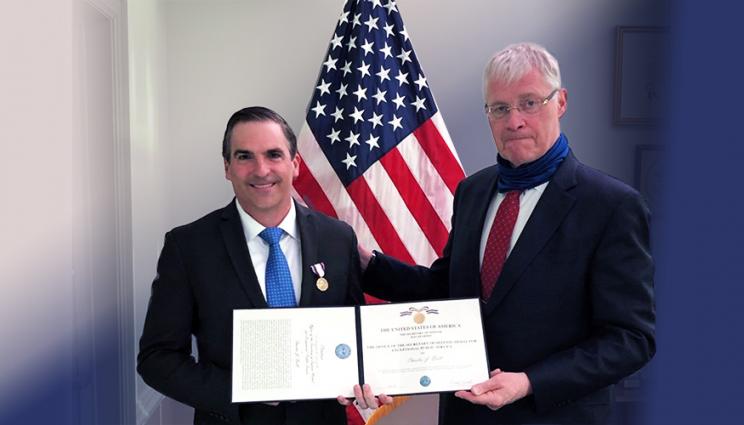 Charles Ball receives the award from Alan R. Shaffer, deputy under secretary of Defense for Acquisition and Sustainment.

Lawrence Livermore National Laboratory's (LLNL's) Charles and Debbie Ball have received the Office of the Secretary of Defense (OSD) Medal for Exceptional Public Service while on assignment with OSD.

The medal is presented by the secretary of Defense to non-career federal employees, private citizens and foreign nationals.

The citation noted that Charles Ball made substantial and lasting contributions to U.S. national security by leading Department of Defense (DoD) reforms to the mission of countering weapons of mass destruction. His leadership and guidance proved invaluable to the Assembled Chemical Weapons Alternative Program’s efforts to destroy the last remaining stockpile of chemical weapons in the United States. Ball shaped the future path for the program and provided the tools needed for the program to meet the Chemical Weapons Convention Treaty obligations and deadline.

“My varied experiences at the Lab prepared me very well for my duties at the Pentagon. Having worked in the Lab’s programs on intelligence, counterproliferation, nonproliferation and arms control, I was sufficiently well-versed in the subjects that fell under my purview to hit the ground running,” Charles Ball said.

Charles Ball, who has returned to the Lab full-time this month as associate chief of staff in the Director’s Office, had been on government service leave as the deputy assistant secretary of defense for Threat Reduction and Arms Control.

“I am grateful for the opportunity I had to serve in the DoD during the last three years, and I am grateful and excited to be serving at the Lab again” he said.

Debbie Ball, who will return to the Lab full time in March to support the Weapons and Complex Integration Directorate and its stakeholder engagement, has been on assignment as the senior policy adviser for Nuclear Deterrence Policy, Office of the Deputy Assistant Secretary of Defense for Nuclear and Missile Defense Policy since November 2017. Her portfolio involves managing policy outreach within DoD, the interagency and Congress on all aspects of the nuclear enterprise. She has primary responsibility for the congressional aspects of the nuclear modernization portfolio. She wrote testimony for and prepared senior DoD leadership for congressional hearings. She also supported arms control discussions with Russia and provided analytical support to the U.S. NATO mission in Brussels.

“My responsibilities at the Pentagon enabled me to be directly involved in the major nuclear weapons-related functions of the Department of Defense: policy formulation, Nuclear Weapons Council deliberations, coordination with NNSA and congressional engagement,” Debbie Ball said. “The opportunity to obtain such a broad-based understanding of nuclear weapons from the perspective of DoD will allow me to better support the Lab’s core nuclear weapons mission when I return.”

Debbie Ball’s citation recognized her performance during a critical time in which the DoD published the 2018 Nuclear Posture Review and began an enormous effort to obtain congressional support to modernize the nation’s nuclear deterrent. Given the importance of the nuclear deterrence mission, and intense congressional oversight, this was a high-profile role in which she excelled.