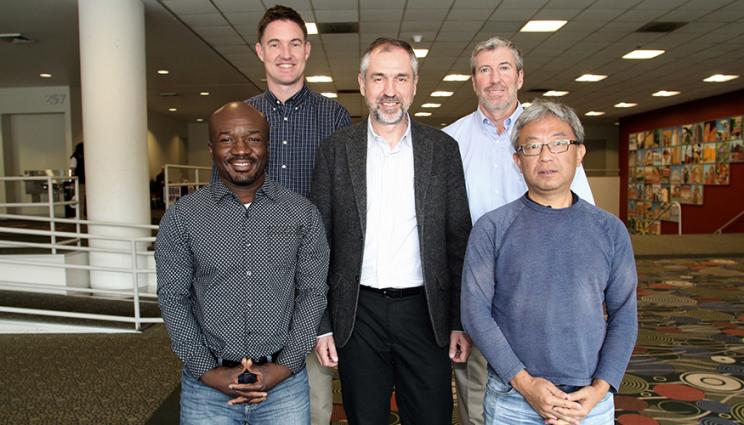 A Lawrence Livermore team’s  dramatically improved first-principles molecular dynamics code that promises to enable new computer simulation applications was one of the finalists for the 2016 Gordon Bell Prize.

The team presented its ground breaking project at the 2016 supercomputing conference (SC16) held in Salt Lake City, Utah Nov. 12-18. "Modeling Dilute Solutions using First-Principles Molecular Dynamics: Computing more than a Million Atoms with over a Million Cores," was the title of the Livermore team’s submission for the competition.

"We are honored to have been among the finalists for this prestigious award," said Jean-Luc Fattebert, lead author of the paper. "We believe our project has the potential to broadly benefit the high performance computing community. Our team’s progress was made possible by broad institutional support and expertise."

In addition to Fattebert, the members of the LLNL team are: Daniel Osei-Kuffuor, Erik Draeger, Tadashi Ogitsu and William Krauss.

First-Principles Molecular Dynamics (FPMD) methods, although powerful, are notoriously expensive computationally because of the quantum modeling of electrons. Traditional FPMD approaches have typically limited simulations to a few thousand atoms at most. This is because of time and solver complexity and the large amount of communication required for highly parallel implementation.

Previous attempts to lower the complexity have tended to introduce uncontrolled approximations or systematic errors that compromise accuracy.

Using a robust new algorithm, the Livermore team has developed an O(N)complexity solver for electronic structure problems with fully controllable numerical error. The team demonstrated on Lawrence Livermore’s Sequoia supercomputer that the code’s minimal use of global communications provides excellent scalability, allowing very accurate FPMD simulations of more than a million atoms on more than a million (computer) cores.

At these scales, this approach provides multiple orders of magnitude speedup compared to the standard ‘plane-waves’ approach typically used in condensed matter applications, without sacrificing accuracy. This will open up new classes of FPMD simulations, such as dilute aqueous solutions.

"A rough estimate of the time-to-solution for the traditional plane waves approach shows that computing a million atoms using a million (computer) cores would take about two years, instead of the 90 seconds it takes with our new technique," Fattebert said.

In very simple terms, this new technique consists of representing the global solution of the physical problem with a set of ‘localized’ quantities to reduce the huge communication and memory requirements that limit traditional molecular dynamics approaches.

Because this new approach requires much less memory and leads to a much faster time-to-solution it "opens the door" to simulating systems, such as insulators, semi-conductors and biological systems, of a size and complexity that were previously impossible to simulate. The new approach promises to enable fundamental science of interest to the Department of Energy (DOE) and its National Nuclear Security Administration (NNSA).

Molecular dynamics has become one of the principal methods for studying the movement of atoms and molecules in complex systems and has broad application in chemistry, physics, materials science, biology and medicine. The team’s project began as a LLNL Laboratory Directed Research and Development project and continues to be funded by DOE/NNSA.