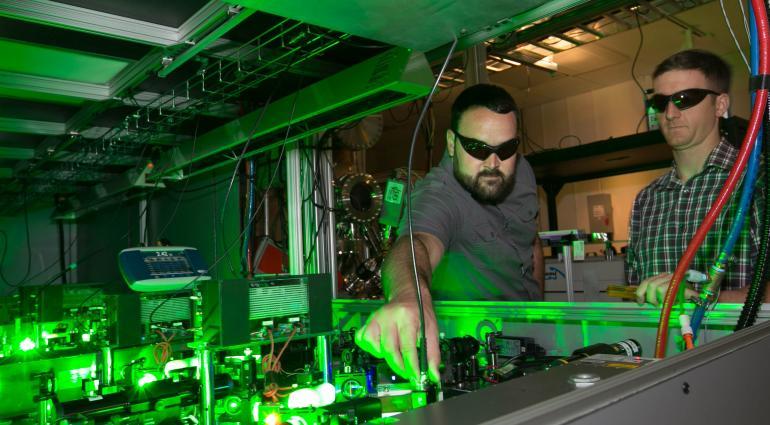 In 2016, U.S. Army Capt. Drake Brewster (right), then a student at the Naval Postgraduate School, conducted research with Lab nuclear engineer Brett Isselhardt and others to advance the technology of LLNL’s Resonance Ionization Mass Spectrometry system. Today, Brewster is a physics instructor at the Military Academy at West Point. Photo by Julie Russell/LLNL

Whether working informally or through a collaboration agreement, Lawrence Livermore National Laboratory (LLNL) and the Monterey-based Naval Postgraduate School (NPS) have enjoyed an enduring relationship for more than two decades.

While the two institutions have worked together informally for years, until recently they had only one memorandum of understanding (MOU) spelling out their joint ventures (2004-2009).

In January, LLNL and NPS finalized a second and new five-year MOU that provides a framework for NPS faculty and student research collaboration with LLNL and reciprocal involvement of LLNL staff in NPS research and academic activities.

“It makes sense when you have two internationally recognized government institutions, one academic and the other a national lab, within about 100 miles of each other, for them to work together,” said retired LLNL nuclear engineer Craig Smith, now an NPS research professor in physics.

Col. George Sakaldasis (U.S. Air Force, retired), a senior adviser for military and nuclear affairs in the Lab’s Office of Defense Coordination (ODC), which helped develop the new MOU, expects the pact to enhance educational benefits not only for NPS students but for LLNL employees.

It will assist in graduate distance learning for master’s, Ph.D. and certificate programs for Lab employees. Employees who are interested in NPS courses can check out the LLNL employee education assistance website at the degree partnership page.

"The MOU also provides for rotating guest lecture visits at NPS and LLNL and enhances opportunities for NPS students to work with LLNL researchers. We consider this partnership to be a vital piece of Livermore’s overall relationship with the U.S. Navy,” Sakaldasis added.

NPS is the Department of the Navy’s applied research university combining student operational experience with graduate education and research to deliver defense-focused solutions and leaders.

“Lawrence Livermore National Laboratory is one of the premier institutions in the U.S. national laboratory complex,” said NPS President and retired Vice Adm. Ann Rondeau. “Our now formalized partnership between NPS and LLNL is intended to further strengthen the historic ties between our two institutions.

“Dozens of NPS masters and Ph.D. students have completed their dissertation and thesis research in close collaboration with LLNL, and now we have a firm foundation for collectively enhancing our applied research and education that will help solve the toughest naval and national challenges.”

Jeffrey Paduan, the NPS dean of research, noted: “This new agreement will strengthen and expand upon the research collaborations between our two institutions. It recognizes the great technical capabilities within the Laboratory and the great benefits of involving our defense-focused faculty and our operationally experienced students in joint projects. We look forward to creating and executing more of these projects.”

Founded in 1909 at Annapolis, Maryland (the home of the U.S. Naval Academy), NPS moved to Monterey in 1951. The school has an undergraduate and graduate enrollment of approximately 2,700 students — about 1,400 full time and 1,300 part time.

Its student body includes officers of all five U.S. military services, civilian employees from the departments of Defense and Homeland Security, law enforcement personnel and officers from numerous allied nations. NPS has graduated more than 40 astronauts, more than any other graduate school in the nation.

Over the years, several dozen Lab leaders or researchers have spoken at NPS – including LLNL co-founder Edward Teller; Bruce Goodwin, who headed the Weapons Complex and Integration Directorate; and Ron Lehman, a former director of the Lab’s Center for Global Security Research (CGSR).

During the first MOU, Smith served as the LLNL chair professor at NPS. He lectured and taught classes on basic nuclear physics, nuclear energy and weapons effects, along with supervising two Ph.D. and 14 master’s degree students engaged in Livermore collaborations.

“When NPS students conduct research at LLNL, they bring their experience with them for the Lab’s benefit,” said Smith, who has taught at NPS for 17 years. “They also contribute as researchers for Lab programs.

“I think one of the more important benefits is that as NPS officers work with LLNL researchers, and as they later move through their careers with increasing responsibility, they carry with them knowledge of the Lab’s capabilities.”

A current Lab employee, Zachary Davis, a senior fellow at LLNL’s CGSR, has served as a research professor at NPS for 15 years, most recently in the school’s Defense Analysis Department.

Within the NPS Defense Analysis Department, which has a focus on irregular warfare and includes Special Operations Forces (SOF) such as Army Green Berets and Navy Seals, Davis teaches courses on counterproliferation.

During his time at NPS and LLNL, Davis has advised approximately five Ph.D. and 50 master's degree students, often connecting NPS students with technical experts at the Lab as part of their research.

CGSR has hosted many NPS SOF officers as visiting scientists who want to conduct research and write about topics of mutual interest to LLNL and SOF.

“Many of my NPS students have visited the Laboratory and collaborated with Lab scientists on their thesis research,” Davis said. “Their experience and knowledge greatly aid LLNL technology developers, especially regarding battlefield-technologies and capabilities. Their relationships with the Lab last throughout their military careers and beyond.

Many of the thesis projects on which Davis has given advice have been used as publications for SOF, and he has lectured at various SOF facilities as part of their training.

LLNL’s MOU with NPS represents the second such agreement the Lab has recently conducted with a military service’s graduate school. In early 2020, a similar MOU was concluded with the Dayton, Ohio-based Air Force Institute of Technology.

In Davis’ view, the typical NPS student is an accomplished mid-career officer who has been selected by their service as their best and brightest, destined to be a future leader. “The relationships with the Lab that are established while they are students at NPS last a lifetime and provide equal benefits.”