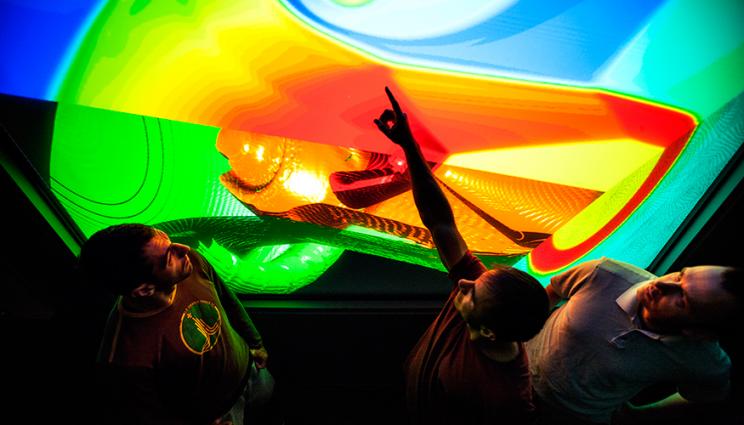 Lawrence Livermore scientists, from left, Vladimir Tomov, Tzanio Kolev and Veselin Dobrev examine a simulation that is representative of the type of high-order methods that the Center for Efficient Exascale Discretizations will focus on. Photo by George Kitrinos/LLNL

Lawrence Livermore National Laboratory (LLNL) was one of four national labs selected today to lead a "co-design" center by the Department of Energy’s Exascale Computing Project (ECP) as part of a four-year, $48 million funding award. Each co-design center will receive $3 million annually. See the announcement.

The ECP is responsible for the planning, execution and delivery of technologies necessary for a capable exascale ecosystem supporting the nation’s exascale imperative, including software, applications, hardware and early testbed platforms. Exascale refers to computing systems at least 50 times faster than the nation’s most powerful supercomputers in use today (systems capable of at least one exaflop, or a billion billion calculations per second).

"Co-design" refers to the collaborative and interdisciplinary engineering process for developing capable exascale systems. As the term implies, this design process requires an interdisciplinary engineering approach in which the developers of the software ecosystem, the hardware technology and a new generation of computational science applications collaborate to ensure all the components work together as a system. The co-design process is paramount to ensuring that future exascale applications adequately reflect the complex interactions and trade-offs associated with the many new and sometimes conflicting design options, enabling these applications to tackle problems they currently can’t address. 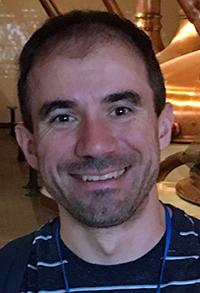 The LLNL-led effort is motivated by the fact that future exascale architectures will require a rethinking of the algorithms used in the large-scale applications that advance many science areas vital to DOE and NNSA, such as global climate modeling, turbulent combustion in internal combustion engines, nuclear reactor modeling, additive manufacturing, subsurface flow and national security applications. The CEED co-design center aims to help these DOE/NNSA applications to take full advantage of exascale hardware by using state-of-the-art ‘high-order discretizations’ that provide an order of magnitude performance improvement over traditional methods.

In simple mathematical terms, discretization denotes the process of dividing a geometry into finite elements, or building blocks, in preparation for analysis. This process, which can dramatically improve application performance, involves simplifying assumptions to reduce demands on the computer, but with minimal loss of accuracy. Recent developments in supercomputing make it increasingly clear that the high-order discretizations, which CEED is focused on, have the potential to achieve optimal performance and deliver fast, efficient and accurate simulations on exascale systems.

"The all-star CEED team I have the privilege to lead is dedicated to the development of next-generation discretization software and algorithms that will enable a wide range of applications to run efficiently on future hardware," Kolev said. "Our co-design center is focused first and foremost on applications. We bring to this enterprise a collaborative team of application scientists, computational mathematicians and computer scientists with a strong track record of delivering performance software on leading-edge platforms. Collectively, we support hundreds of users in national labs, industry and academia and we are committed to pushing simulation capabilities to new levels across an ever-widening range of applications."

In addition, the Lab is playing a leadership role in another of the co-design centers. LLNL's Jim Belak, senior scientist in the Materials Science Division, is deputy princial investigator for the Co-design Center for Particle-based Methods, which is an outgrowth of DOE's Exascale Co-design Center for Materials in Extreme Environments (ExMatEx), a close partnership of Los Alamos and Lawrence Livermore.

The ECP is a collaborative effort of two DOE organizations - the Office of Science and the National Nuclear Security Administration. See the web.