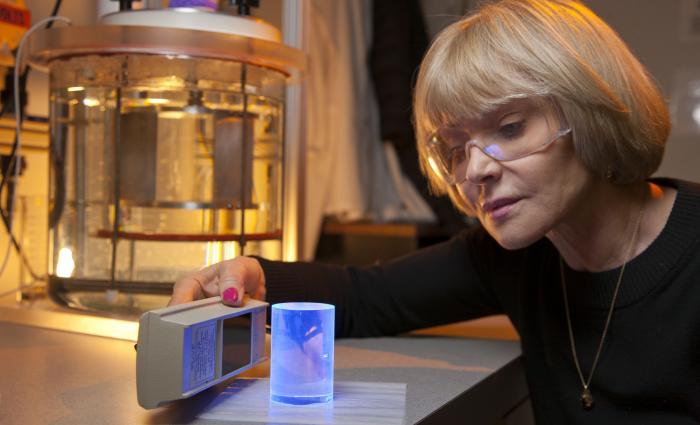 Natalia Zaitseva, a Lawrence Livermore materials scientist, leads a team of researchers that has developed the first plastic material capable of efficiently distinguishing neutrons from gamma rays, something not thought possible for the past five decades.

A Lawrence Livermore National Laboratory physicist who developed a way to rapidly grow large crystals used in the Lab’s National Ignition Facility (NIF)  laser will be honored next month.

For her achievements, Natalia Zaitseva will be inducted into the Alameda County Women’s Hall of Fame (WHF) during the 22nd annual awards ceremony on Saturday, March 21. The event, set for the Greek Orthodox Cathedral in Oakland, will begin at 12:30 p.m.

One of 12 Alameda County women to be inducted, Zaitseva will be recognized for her work in science, technology and engineering.

While working on her Ph.D. at Moscow State University, Zaitseva developed a method for growing extremely large crystals faster than had ever been achieved before.

Many scientists had been skeptical that such a process would prove successful. However, she succeeded in demonstrating that crystals from solution could be grown 10-100 times faster than by using traditional methods.

Zaitseva perfected the crystal-growing process after arriving at LLNL in 1993. At that time, LLNL researchers were seeking to produce large crystals of high-quality potassium dihydrogen phosphate (KDP) for Livermore lasers such as NIF, now the largest and most energetic laser in the world.

In 1997, Zaitseva’s team produced in only 45 days a KDP crystal that measured 54 centimeters across (a little more than 21 inches). Growing a crystal that size using earlier technologies would have taken more than 18 months.

This work has been important for the NIF laser, which will advance national security, energy research and basic research.

In another one of her important breakthroughs, Zaitseva and another scientist led a team of LLNL researchers that announced in 2012 that they had developed the first plastic material capable of efficiently distinguishing neutrons from gamma rays, something not thought possible for the previous five decades.

This technology is important because it could assist in detecting nuclear materials such as plutonium and uranium that might be used in improvised nuclear devices by terrorists, and could help in detecting neutrons in major scientific projects.

With the material’s low cost, huge plastic sheets could be formed easily into dramatically larger surface areas than other neutron detectors currently used and could aid in the protection of ports, stadiums and other large facilities.

She joins 10 other current or past LLNL employees to be selected for the Alameda County WHF. They include: Gina Bonanno, a former program manager for NIF; Dona Crawford, associate director for Computation; Pam Hullinger, agricultural security program lead; Hope Ishii, a former LLNL physicist now at the University of Hawaii; Crystal Jaing, a molecular biologist; Tammy Jernigan, deputy principal associate director for Weapons and Complex Integration; Claire Max, now a professor of astronomy and astrophysics at the University of California, Santa Cruz;  Lisa Poyneer, an electrical engineer; Ellen Raber, associate program manager within the Global Security principal directorate; and Dawn Shaughnessy, a group leader for experimental nuclear and radiochemistry.