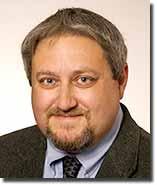 LIVERMORE, Calif. —William Goldstein of the Lawrence Livermore National Laboratory has been awarded the distinction of American Association for the Advancement of Science (AAAS) Fellow. Election as a fellow is an honor bestowed upon AAAS members by their peers.

This year 531 members have been awarded this honor for their scientifically or socially distinguished efforts to advance science or its applications. New fellows will be presented with an official certificate and a gold and blue (representing science and engineering, respectively) pin on Saturday, Feb. 20, at the AAAS Fellows Forum during the 2010 AAAS Annual Meeting in San Diego.

This year’s AAAS fellows will be announced in the AAAS News & Notes section of the Dec. 18 edition of the journal Science .

As part of the physics section, Goldstein was elected for distinguished contributions to plasma modeling and diagnostics and for leadership in support of the Department of Energy national security programs.

"This is a great honor that I owe largely to the Lab for the opportunity to contribute scientifically while addressing important national problems," Goldstein said. "I hope the fellowship will help me advocate for the critical role of science in international security."

Early in his career, Goldstein co-authored and was among the first to apply a set of atomic modeling codes that have been used to significantly advance understanding of high-energy density plasma properties through spectral modeling. The codes, developed at Hebrew University and Lawrence Livermore, qualitatively improved modeling of atomic processes in plasmas, and have had impact in high-energy density applications including X-ray lasers, high-energy astrophysics and fusion energy research.

Goldstein went on to help develop the first spectroscopic diagnostics for astrophysical photoionized plasmas, designed some of the earliest laboratory astrophysics experiments using high-power lasers, and pioneered the use of detailed atomic models for predicting energy balance in Tokamaks.

More recently, Goldstein has been a leader in the establishment and management of the Department of Energy’s Stockpile Stewardship Pprogram. Based on his experience using lasers in weapons physics research, he laid out the first systematic program of high-energy density science for the National Ignition Facility.

William Goldstein
American Association for the Advancement of Science fellowships