LLNL researchers have developed a new cryptocurrency that uses electricity for transmission.

Researchers from Lawrence Livermore National Laboratory have devised a physics-based cryptocurrency that can transmit electricity.

Through the combination of statistical mechanics and information theory, scientists have been able to design a class of stablecoin that is linked to electricity, known as the E-Stablecoin.

According to the research, the E-Stablecoin would be minted through the input of one kilowatt-hour of electricity, plus a fee. This new blockchain concept would allow electricity to be transmitted between users who are spread around the world, without the need for interconnecting wires or a grid-based transmission system.

E-Stablecoin could therefore be the first fully collateralized stablecoin, as its value would be pegged to a physical asset – electricity – that is dependent on its utility.

A diagram of a plutonium atom structure. Image credit: LLNL.

Improving our understanding of the physical characteristics of plutonium as it ages is a vital aspect of maintaining the reliability of the U.S. nuclear deterrent in the absence of underground testing. The recent installation of a new plutonium target fabrication facility at Lawrence Livermore aims to further progress toward that goal.

Researchers have developed a three-pronged program of experiments on the National Ignition Facility (NIF) to help determine plutonium’s equation of state — the relationship between pressure, temperature and density — along with its strength and phase transitions. The results are integrated with data from related experiments at Los Alamos and Sandia national laboratories as part of the National Nuclear Security Administration’s science-based Stockpile Stewardship Program.

“Our assessment of the physics of plutonium feeds into the weapons program and supports the safety, security and reliability of the nuclear deterrent,” said design physicist Heather Whitley, associate program director for high energy density science in the Weapons Physics and Design Program of LLNL’s Weapons and Complex Integration directorate. “We can’t do any of these experiments without the contributions of every single person on these teams.”

Plutonium “pits”— spherical shells of plutonium about the size of a bowling ball — are a key part of the nation’s nuclear warheads. 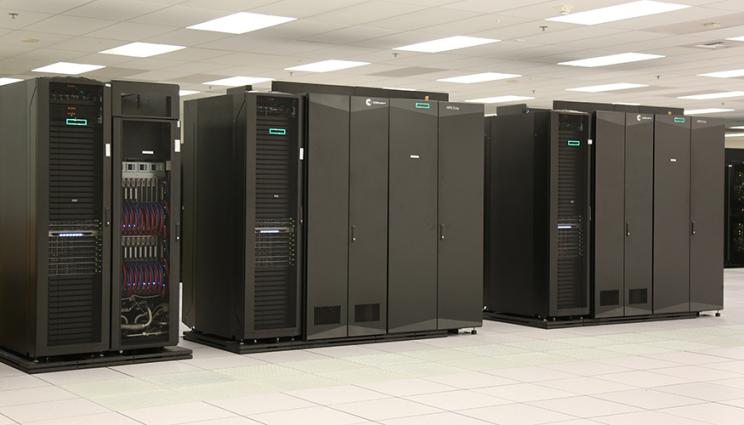 Three testbed machines for LLNL’s future exascale El Capitan all ranked among the top 200 on the latest Top500 List of the world’s most powerful computers, released at the International Supercomputing Conference. Photo by Katrina Trujillo/LLNL.

Despite being “testbed” machines for El Capitan, the National Nuclear Security Administration’s first exascale supercomputer, the three early access systems — rzVernal, Tioga and Tenaya — all ranked in the top 200 worldwide.

Of the three, rzVernal was the highest at No. 123, with a peak on the High Performance Linpack (HPL) benchmark of 4.1 petaflops (4.1 quadrillion floating point operatons per second) — the HPL score reflects system performance for solving a dense system of linear equations. Tioga placed No. 135 on the list, with a Linpack score of 3.67 petaflops (PF), and Tenaya achieved 2.86 PF, good enough for the No. 200 slot.

El Capitan is expected to surpass two exaflops (two quintillion floating point operations per second) after it is accepted at LLNL in 2023. With the addition of the new machines, LLNL now boasts nine systems on the bi-annual list, more than any other high performance computing center in the U.S. 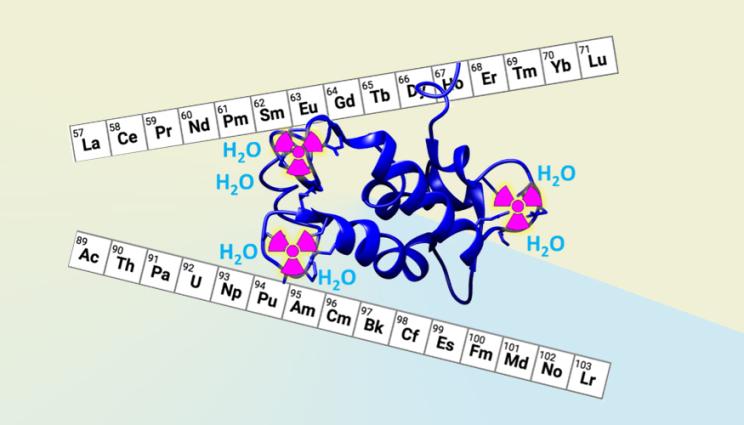 The natural protein lanmodulin (depicted in navy blue) was bioengineered by a collaboration of scientists from LLNL and Penn State University to better scavenge and separate elements found in nuclear waste, such as the actinides and their lanthanide fission products. Image by Gauthier Deblonde/LLNL.

Lawrence Livermore scientists and collaborators at Penn State University are improving natural molecules that would help target specific radioactive elements that are found in nuclear waste or used in nuclear medicine.

Even the most effective molecules found in nature, which underwent billions of years of evolution, can still be improved for non-natural applications. The team bioengineered nature's most potent protein (lanmodulin) for lanthanides  — natural elements used in numerous items like computer hard drives and magnets — to make it even more selective for actinide elements. Actinides are radioactive metals that are present in nuclear waste, such as uranium, plutonium and americium.

The results improve the understanding of how natural compounds can interact with nuclear waste in the environment and could lead to new molecules for scavenging and detection of specific radioactive metals.

The team strategically designed, synthesized and characterized five variants of lanmodulin (LanM) to decipher and eventually improve its actinide-binding properties. Surprisingly, they found that the presence of water molecules that bridge the metal and protein molecule is particularly important for controlling the stability and metal preferences of the metal-protein complexes. This design principle allowed the scientists to improve the protein's ability to discriminate between actinide and lanthanide elements. 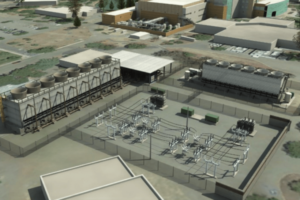 The Exascale Computing Facility Modernization project upgrades the electrical and mechanical capabilities of the Livermore Computing Center, which will enable the facility to deliver exascale-class computing service.

As modern as next week

The Department of Energy’s National Nuclear Security Administration announced the formal completion of construction on the Exascale Computing Facility Modernization project at the Lawrence Livermore National Laboratory. The project upgraded the electrical and mechanical capabilities of the Livermore Computing Center, which will enable the facility to power the first NNSA exascale system, named El Capitan, and to provide exascale-class computing service (of performance of at least one quintillion calculations per second) to LLNL, Los Alamos and Sandia National laboratories.

On May 5, NNSA approved the formal completion of construction and the beginning of the transition to operations – known as Critical Decision-4 under the Department of Energy’s process for planning and executing major construction projects. The project more than doubled the facility’s existing cooling capacity, which is now capable of absorbing enough heat to melt 28,000 tons of ice in a day. It also upgraded the existing 45 megawatt electrical system to 85 megawatts, an expansion that included new transmission lines, switches and substations.

The Lab held a ribbon cutting ceremony to celebrate the accomplishment on June 15.