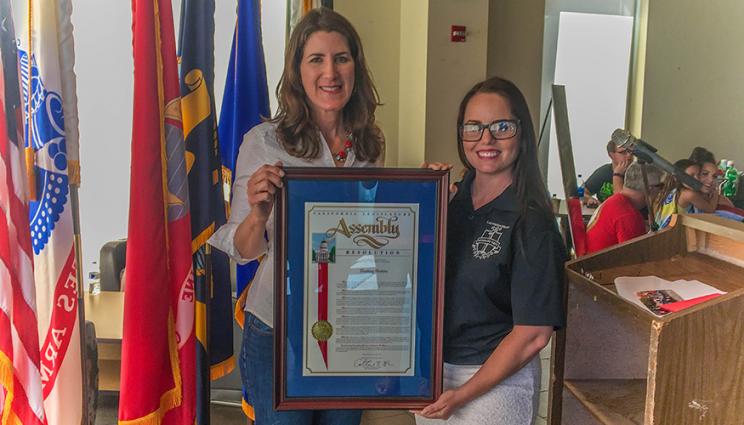 Baker (R-Dublin) issued the resolution honoring Goddu during a ceremony at Las Positas College, where Goddu, a U.S. Marine Corps veteran, recently received her associate degree in engineering technology. Baker said Goddu stood out among veterans in the area not only because of her distinguished military service, but also her work with other student veterans at Las Positas, where she served as president of the school’s Student Veteran’s Organization and volunteered in the Veterans Resource Center, which supports returned veterans in the classroom and helps connect them with their benefits.

"Every Assembly member has the opportunity to select one individual in the district as the Veteran of the Year," Baker said. "This year (Destiny’s) name came to me many times from many people, and made it very easy for me because I’ve had the opportunity to see the impact she has made on this campus with other veterans’ lives."

Goddu, who works part-time on diagnostics in the National Ignition Facility, was a sergeant in the Marines and earned her degree through the Veterans to Technology (Vets to Tech) program, a collaboration between the Lab, Las Positas College and the Alameda County Workforce Investment Board (WIB). She’s also a strong advocate for funding of veterans’ resource centers at colleges throughout the state, making visits to Sacramento and Washington D.C. to speak with lawmakers.

"It’s incredible," Goddu said of the award. "I’m just extremely grateful to be honored and so happy that everyone could be here to share this experience, especially the past recipients. It really meant a lot."

In addition to the Veteran of the Year recognition, Goddu has received 11 scholarships this year, including a $10,000 scholarship award from the Valley Veterans Foundation. She is currently working on finishing up her transfer requirements to attend a four-year college and obtain a master's degree in electrical engineering, with a preference for UC Berkeley. She plans to continue working at LLNL while she goes to school full-time.

"With Destiny, if she needs to go to D.C. or something, she’s there," Steffens said. "She figures out a way to do it and still maintain her grades. Even though she’s working at the Lab and taking all these classes, when we had to get student vets to go to Sacramento, she was one of the first ones to volunteer. It’s been very rare where she’s said, ‘I can’t go.’ She’s well deserving of the recognition."