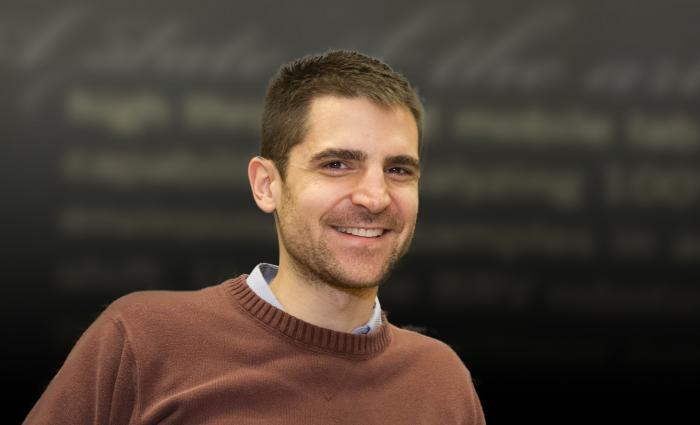 Jeff Drocco, a scientist and analyst with the Biodefense Knowledge Center at Lawrence Livermore, was a recent participant in the Emerging Leaders in Biosecurity Initiative program. Drocco is one of 28 fellows – selected from nearly 100 applicants – participating in the program at the Center for Biosecurity, which is operated by the University of Pittsburgh’s Medical Center. Photo by Julie Russell/LLNL

A spring workshop in the nation’s capital earlier this month provided an auspicious start for LLNL’s Jeff Drocco and other participants in the Emerging Leaders in Biosecurity Initiative program.

Drocco is one of 28 fellows — selected from nearly 100 applicants — participating in the program at the Center for Biosecurity, which is operated by the University of Pittsburgh’s Medical Center.

A scientist and analyst with the Biodefense Knowledge Center here at the Lab, Drocco and other fellows spent three days in Washington, D.C. learning about biosecurity developments, policies and how decisions in the field are crafted.

"It was amazing. Biosecurity is not a large field and the program featured a real 'who’s who' of the people who work in it," Drocco said.

"Part of the draw of the week also was to meet the other fellows, who represent a broad diversity of backgrounds, including public health and epidemiology, working at Department of Defense labs, coming from Canada and the United Kingdom, industry and academia," he said.

During their time in Washington, D.C., the biosecurity fellows spent a day at the Pentagon, where they received a briefing from a Defense Threat Reduction Agency staffer, Franca Jones, who talked about efforts to protect the warfighter from biological agents.

Another stop on their schedule was the White House, where the fellows heard from Larry Kerr, the director for medical preparedness policy on the National Security Council, who spoke about the nation’s Ebola response, among other topics.

One of the workshop’s other high points, according to Drocco, was a talk by Bob Kadlec, a staff director for the Senate Select Committee on Intelligence, who spoke about how agencies negotiate and how decisions are made at the executive level.

Among the other speakers during the three-day workshop were Andy Weber, a former assistant secretary of defense for Nuclear, Chemical and Biological Defense; and Tara O’Toole, a former Department of Homeland Security undersecretary for Science & Technology.

As part of applying for the Emerging Leaders in Biosecurity Initiative, Drocco wrote an essay expressing concern about whether privacy provisions have kept up with the major strides made in technology.

He asked, "Now that sequencing has become so common and so cheap, can people maintain privacy over their genetic information in the years ahead?"

In August, the program fellows will travel to the United Kingdom to visit the UK Defence Science and Technology Laboratory and the Pirbright Institute, which studies animal diseases.

The biosecurity fellowship initiative is a competitive program designed to create and sustain a multidisciplinary and intergenerational biosecurity community made up of young professionals, as well as current leaders.

Drocco, 32, who joined the Laboratory in May 2013, holds a Ph.D. in biophysics from Princeton University.