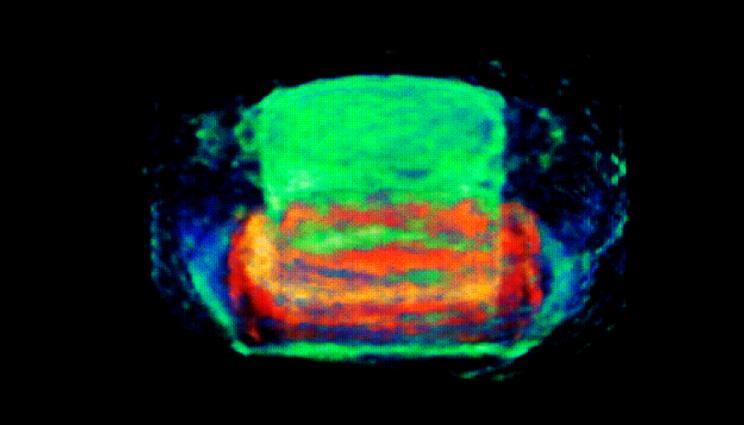 A 3D rendering of an exploding foil initiator.

EFI is an improvement of the earlier exploding-bridgewire detonator. Instead of directly coupling the shock wave from the exploding wire, the expanding plasma from an explosion of a metal foil drives another thin plastic or metal foil called a "flyer" or a "slapper" across a gap, and its high-velocity impact on the explosive then delivers the energy and shock needed to initiate a detonation.

"The rich imaging data on EFI and flyer microstructure with time represent a new opportunity to refine the understanding of flyer operation of slapper detonators," said LLNL’s Trevor Willey, a co-author of the research. "Parameters can be tuned to achieve optimal performance. The data will aid in understanding the initiation mechanism for slapper detonators."

The research is important for assessing aging margins, safety and performance, and in developing new and improved designs.

During the experiment, a LANL/NSTech-developed four-camera system acquired four images from successive X-ray pulses from each shot. The first frame was prior to bridge burst. The second images the flyer about 0.16 millimeters (mm) above the surface, but edges of the foil and/or flyer are still attached to the substrate. The third frame captures the flyer in flight, while the fourth shows a completely detached flyer in a position that is typically beyond where slappers strike initiating explosives. The researchers then used the recently developed Livermore Tomography Tools to reconstruct 3D images of operating flyers.

The technique is now being used to support several ongoing programmatic efforts within LLNL.

The research appears in the Journal of Applied Physics.