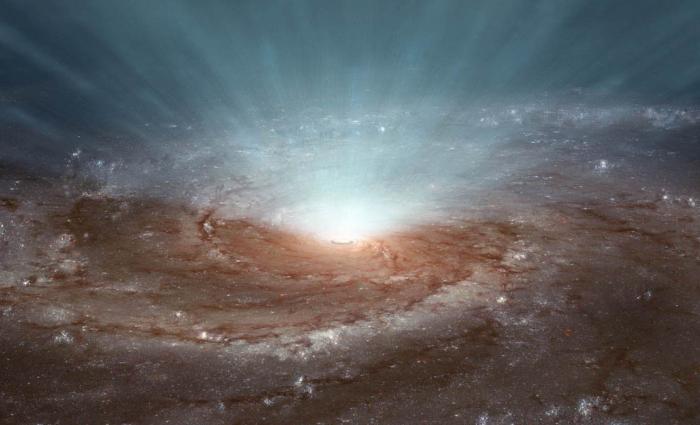 Supermassive black holes at the cores of galaxies blast radiation and ultra-fast winds outward, as illustrated in this artist's conception. New data from NASA's Nuclear Spectroscopic Telescope Array (NuSTAR) and the European Space Agency's XMM-Newton telescopes show that these winds, which contain gases of highly ionized atoms, blow in a nearly spherical fashion, emanating in every direction, as shown in the artwork.
With the shape and extent of the winds known, the researchers were able to determine the winds' strength. The high-speed winds are powerful enough to shut down star formation throughout a galaxy. Image courtesy of NASA/JPL-Caltech

By looking at the speed of ambient gas spewing out from a well-known quasar, astronomers are gaining insight into how black holes and their host galaxies might have evolved at the same time.

Using the Nuclear Spectroscopic Telescope Array (NuSTAR), researchers were able to use the X-ray spectra of an extremely luminous black hole (quasar PDS 456) to detect a nearly spherical stream of highly ionized gas streaming out of it.

The discovery allowed astronomers to measure, for the first time, the strength of ultra-fast black hole winds and show that they are mighty enough to affect the fate of their host galaxies.

The evolution of galaxies is connected to the growth of supermassive black holes in their centers. During the quasar phase, a huge luminosity is released as matter falls onto the black hole, and radiation-driven winds can transfer most of this energy back to the host galaxy.

"We know that black holes in the centers of galaxies can feed on matter, and this process can produce winds. This is thought to regulate the growth of the galaxies," said Fiona Harrison of the California Institute of Technology, the principal investigator of NuSTAR and a co-author on a new paper about the results appearing in the Feb. 19 issue of the journal Science. "Knowing the speed, shape and size of the winds, we can figure out how powerful they are."

Supermassive black holes blast matter into their host galaxies, including X-ray-emitting winds traveling at up to one-third the speed of light. In the new study, astronomers determined that PDS 456, an extremely luminous active black hole, or quasar, has winds that carry more energy every second than what is emitted by more than 1 trillion suns.

That's enough of a punch to affect the entire galaxy and its ability to make stars.

"By looking at this huge spherical outflow, we can see a mechanism to explain the correlation between black hole and galaxy formation," said Bill Craig of Lawrence Livermore National Laboratory and the Space Science Laboratory at University of California, Berkeley.

NuSTAR and the European Space Agency's XMM-Newton simultaneously observed PDS 456, located more than 2 billion light-years away, on five separate occasions in 2013 and 2014. The space telescopes complement each other by seeing different parts of the X-ray light spectrum: XMM-Newton sees low-energy X-rays and NuSTAR sees high-energy X-rays. Their goal was to look for iron, which is blown from the black hole winds along with other matter.

The researchers looked for scattered light signatures from iron atoms originating from the sides of the supermassive black hole.

The NuSTAR's higher-energy X-ray data, when combined with observations from XMM-Newton, provided the key information, proving that the winds emanate not in a beam but in a nearly spherical fashion.

With the shape and extent of the winds determined, the researchers could then determine the power of the wind and the degree to which they can quench the formation of new stars.

The new report demonstrates that a supermassive black hole and the galaxy that nurtures it are connected by high-speed winds. As the black holes bulk up in size, their winds push vast amounts of matter outward through the galaxy, which ultimately stops new stars from forming.