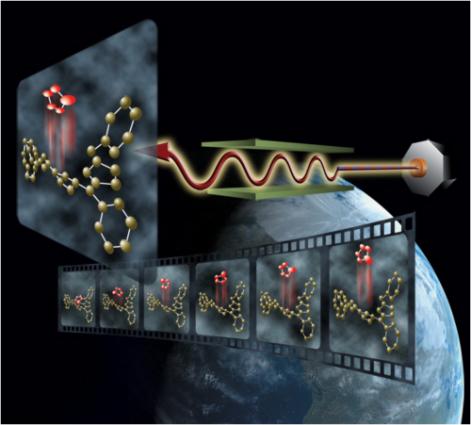 A rendering of the femtosecond camera, which can sequence together images of the ultrasmall, taken with the ultrafast pulses of the LCLS.

The brightest X-ray laser in the world awakened with a series of experiments to characterize its beams and interactions with materials.

Its light is so bright at 2 kilo electron volts (it has already produced 8 keV light, as well) and so fast (it has a pulse length from 10 femtoseconds to 100 femtoseconds) that LLNL scientists like Stefan Hau-Riege expect to validate the physics of simulations they've conducted using materials such as graphite.

In one of the first science-driven commissioning experiments, the tiny initials LCLS were etched into boron carbide — a super-hard substance used in accelerator shielding and body armor — that helped researchers explore the capabilities of LCLS.

Last month, the team, made up of scientists from LLNL, LCLS and European institutions, characterized several significant properties of the beam including the wavefront — the pattern of incoming X-rays of various energies and intensities — the intensity distribution across space, total beam energy, as well as the beam exposure required to damage materials in its path.

Hau-Riege's first user experiment, scheduled for late spring 2010, will use the laser to explore the properties of a graphite lattice. "Once we heat it up, we can see the scattering and measure the temperature, density and distortion before the sample is destroyed."

The heart of the LCLS is a free-electron laser that produces beams of coherent, high-energy X-rays. Coherence — the phenomenon of all photons in a beam acting together in perfect lockstep — makes laser light far brighter than ordinary light. Because X-ray photons at the LCLS are coherent, the resulting beam of light will be as much as a billion times brighter than any other X-ray light source available today.

The LCLS also contains a femto-camera that can sequence together images of the ultrasmall, taken with the ultrafast pulses of the light source. Scientists are for the first time creating molecular movies, revealing the frenetic action of the atomic world for us to see.

The LCLS, and its cousins planned in Germany and Japan, improves on third-generation light sources. The third-generation sources are circular, stadium-size synchrotrons, and they produce streams of incoherent X-ray photons. Since their pulses are long compared to the motion of electrons around an atom, synchrotron light sources cannot begin to explore the dynamic motion of molecules.

The pulses of light from the fourth-generation LCLS are so short, lasting for just quadrillionths of a second, that its beam provides an X-ray strobe light to capture such atomic and molecular behavior.

Lawrence Livermore was part of a SLAC-led consortium to plan, design and build the LCLS. Other partners include the University of California at Los Angeles (UCLA) and Los Alamos, Brookhaven, and Argonne national laboratories.