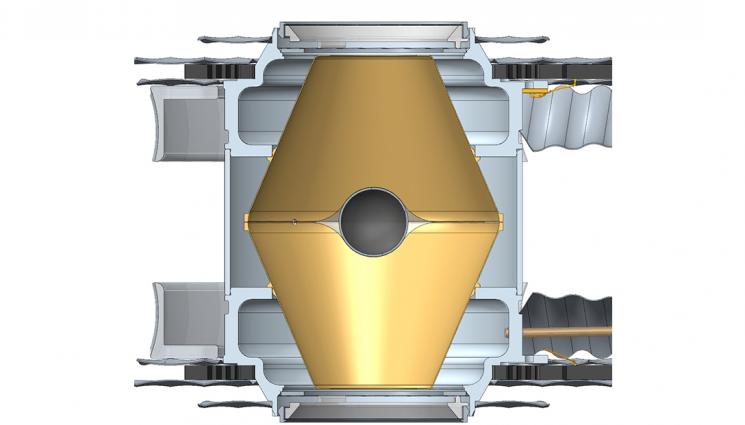 This drawing of a Frustraum hohlraum shows the conical shape of the two halves. The target capsule is represented in the middle, suspended from the waist of the hohlraum by a thin polymer film called a tent. Credit: Scott Vonhof.

Frustraum hohlraum design is shaping up

Hohlraums shaped like cylinders have been the workhorse of inertial confinement fusion (ICF) research for three decades. But now an angular hohlraum named “Frustraum” could become a key to the next stages of ICF research at the National Ignition Facility.

The LLNL-designed Frustraum could enable a significant boost in the amount of laser-induced energy absorbed by an ICF fuel capsule, an important increase that could pull NIF research a step closer to achieving the burning plasma stage needed to eventually reach ignition, according to a paper recently published in Physics of Plasmas.

“There’s a lot of excitement over what we’re going to find out,” said Amendt, who designed the Frustraum and coined its name. “An energy coupling increase was seen in the subscale campaign. How well that persists in the large-scale campaign, we’ll find out.”

Previous research using a hohlraum shaped like a rugby ball increased the level of laser-induced energy absorbed by a single-shell ICF fuel capsule to about 30 percent. That is about double the level of energy absorption — known as energy coupling — of 10 to 15 percent with a standard cylindrical hohlraum used at NIF.

The rugby experiments inspired development of the Frustraum, a hybrid name Amendt coined in 2018 as a play on the already familiar word hohlraum (German for "hollow space" or "cavity”) — combining the New Latin word frustum, for “piece broken off,” with the German word raum, for “room” or “space.”

The Frustraum “is simply constructed from two truncated conical halves (or frusta) joined at the waist,” or widest portion in the middle, the paper said. As with other hohlraums, each end is open to allow laser beams to enter.

The name Frustraum stuck both within and outside the Lab, said Amendt, who has been leading a Laboratory Directed Research & Development (LDRD) project to pursue advanced hohlraum designs beyond the standard cylinder. A complimentary design to the Frustraum is the I-Raum, a cylindrical hohlraum with recessed pockets in the wall near the laser entrance holes (see “Improving the Energy Balance in NIF Hohlraums”).

The goal of testing new hohlraum shapes is to increase the energy coupling efficiency using the same amount of energy now produced by the 192 laser beams at NIF, the world’s largest and most energetic laser.

“Any means of improving the hohlraum-to-capsule efficiency can only help the margin budget and facilitate the path to ignition,” said the authors of the Physics of Plasmas paper. “Although the benefit of higher capsule absorbed energy has been long known, its implementation in cylindrical hohlraums has proved challenging and elusive.”

“It is clear that the cylinder geometry has its limits in accommodating a larger capsule — which begs the question as to why the cylinder has been the workhorse of hohlraum studies for the past 30 years,” the authors said.

Computer simulations for the Frustraum design showed it had promise. “In sum, the energetics of the Frustraum employing a 1.5-millimeter-radius capsule can be made to strongly resemble that of the standard cylinder using a 1.0-mm-scale capsule,” the authors said.

Amendt was the main designer of the rugby hohlraum, which, like the ball used in its namesake sport, has a wide center that can accommodate a target capsule with a radius about 50 percent larger than the ones used in a cylinder hohlraum.

Implosion symmetry is affected by imperfections of the target shell, including the smoothness of the capsule surface, the tiny fill tube used to inject the deuterium and tritium (DT) fuel mixture, and the ultrathin polymer film “tents” that support the capsule inside the hohlraum. With a larger target capsule, implosion symmetry becomes less susceptible to those imperfections.

“By having larger capsule and surface area, the capsule absorbed energy almost triples compared to what we’re used to in a cylinder,” Amendt said. “So without doing anything to the NIF laser, you make it behave like a 6-megajoule laser instead of a 2-megajoule laser at no expense.”

Like its more egg-shaped rugby cousin, the Frustraum can also handle a larger target. But the flatter sides tapered toward the top and bottom openings reduce the wall surface area, which results in energy savings while still allowing a larger middle bulge to accommodate a bigger fuel capsule.

NIF’s laser beams enter at different angles — outer (large angle) and inner (small angle) — through the entrance holes on each end of a hohlraum. With a cylindrical hohlraum, Amendt said, the inner beams tend to stop prematurely, making the implosions more pancake-shaped instead of the desired symmetrical sphere.

Simulations suggest increasing the Frustraum’s wall angles by a degree or two is a “tuning lever” that can be used to control implosion symmetry. The Frustraum walls could be adjusted during the fabrication process to angle the inner beams to propagate further into the hohlraum to drive a more symmetrically round implosion.

Reflected light generated by the outer laser beams hitting the walls also precondition the plasma inside the hohlraum ahead of the inner beams, which, depending on the wall angles, could help achieve symmetry.

Adjusting wall angles “is an important tuning lever, one knob we have at our disposal,” Amendt said. “Another knob is decreasing the gas fill in the hohlraum.” Further levers could be shortening the laser pulse, changing slightly the outer-cone laser frequency to transfer more energy to the inner cones, or moving the outer cones inward a modest amount.

The paper, which was submitted for publication in April, concluded that simulations showed enough promise to warrant fielding an actual Frustraum hohlraum in experiments. Researchers have since conducted three experiments using a smaller 7-mm-diameter subscale Frustraum.

The subscale campaign tested for potential damage to laser lines, optics or mirrors, and established new data to measure against benchmarks culled from “years and years of cylinder data,” Amendt said. “We wanted to get our feet wet in an entirely new platform.”

The symmetry of implosions did not go completely as expected, but “now we understand why,” he said.

The next step is a full-scale campaign scheduled to start in November and continue into the first part of next year. The campaign will employ a 9.2-mm-wide Frustraum but start with a target capsule that is smaller than the ones now used for ICF research, “so it’s an intermediate step to get our bearings,” Amendt said.

“This is expected to improve symmetry control while still coupling more energy to the capsule than has been possible in a standard cylinder,” Ross said.

He said the Frustraum also is interesting because of the way the plasma inside the target moves relative to the NIF laser beams.

“The geometry is predicted to be more sensitive to cross-beam energy transfer (CBET) than a cylinder,” he said. “Upcoming experiments will determine if this is a positive or negative for symmetry control.”

The experiment with alternative hohlraums like the Frustraum are important to further NIF’s missions of stockpile stewardship and energy security.

“There so much upside to this it really behooves us to pull out all the stops and make it work, give it our best effort,” Amendt said. “There’s so much at stake.”