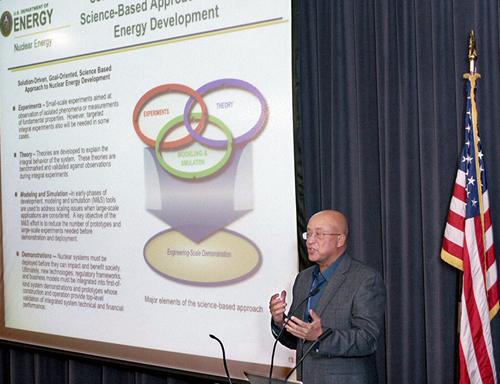 How will the United States deal with the many challenges and roadblocks concerning nuclear energy's place in the nation's energy portfolio?

Last week, Warren "Pete" Miller, DOE nuclear energy assistant secretary, attempted to answer that question when he spoke about the past, present and future of nuclear energy  to a crowded Bldg. 155 auditorium during his presentation, "DOE Nuclear Energy Programs: The Long and the Short, the Far and the Near." The talk was part of his two-day visit to LLNL for tours and briefings.

Miller, who received a Ph.D. in nuclear engineering from Northwestern University, has had a successful 27-year career in research and in management positions at Los Alamos National Laboratory (LANL), and more recently served in academia as a research professor of nuclear engineering and director of the Nuclear Security Science and Policy Institute at Texas A&M University.

Nominated by President Obama for his current post in June and later confirmed by the Senate in August, Miller began his talk with a lighthearted reference to the LLNL–LANL rivalry, and said about his Livermore visit, "It's a pleasure to return."

During his nearly one-hour presentation, Miller shared key observations, stating that the Obama administration is "serious" about the nuclear energy program, and with good reason. The United States is among the highest electrical users in the world, with high CO 2 emissions. "DOE aims to reduce the CO 2 emissions by 80 percent by 2050," he stated.  At present, nuclear power produces only 20 percent of energy in the United States.

He spent much of his talk outlining the five key imperatives or the "road map" that describe the next few decades of what the national nuclear program hopes to achieve, especially within the domain of research and development. These are:  Extend the life span of the nuclear power plant beyond 60 years, and with improved performance; enable new builds; transition from fossil fuels; develop a sustainable fuel cycle; and understanding of and ways to avoid proliferation risks.

Addressing the extension of a power plant's life span, Miller equated the goal to that of the nuclear weapons program, saying it would involve challenges for research and development along with questions about government funding.

Regarding building new power plants, Miller explained the near-term process of a "newer-wave" or smaller, more economical, modular plant as opposed to big plants — a concept that could "encourage a more near-term program and innovative approaches."

In terms of a transition from fossil fuels, he used a computer analogy which brought laughter from the audience: "We have ASCI aspirations with a PC budget," he said. Nuclear energy is not contributing that much to this goal and we have to make a bigger contribution, he noted.

In speaking to developing sustainable fuel cycles, Miller said that a blue ribbon commission will soon be named to rigorously address options and decisions in this arena.

Lastly, he said that within the current administration, there is a "tremendous amount of energy around proliferation concerns."

"What we are attempting (here) is a cradle-to-grave approach," he said, using "carrots instead of sticks" to invite and encourage participation of international entities.

In closing, Miller answered questions from the audience.

Addressing alternative energy sources now on the table and the public's acceptance of nuclear power, Miller said: "No one can argue with studies that say we (United States) have options for energy," but emphasized, "We need a game-changer," alluding to such ideas as collaborating with the Japanese in obtaining uranium from sea wate, to further advance the nuclear energy option.

In addition, Miller addressed concerns about the human resource requirements of the U.S. nuclear industry and the status of the current workforce's ability in building new plants and infrastructures. He stated reassuringly that there are programs in place, mentioning one such effort at Texas A&M to train individuals for nuclear-related careers.

All in all, Miller said a true test ahead will be to evaluate the role of the U.S. government versus the private sector in forging a successful nuclear program into the next several decades.