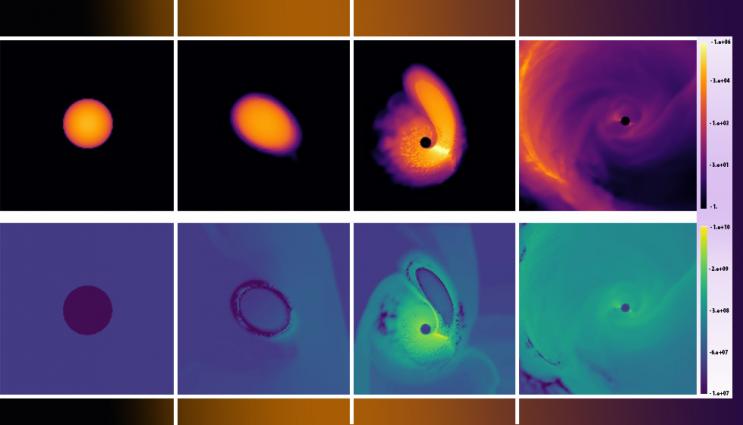 Supercomputer simulations show the evolution of a dormant white dwarf star reigniting as it whizzes around an intermediate-mass black hole. The top series of images show density, the bottom show temperature.

'Zombie' stars return from the dead

Black holes are among the most elusive objects in the universe, but research out of Lawrence Livermore National Labroatory (LLNL) suggests the remnant cores of burned-out stars could be the key to making the first observation of the most elusive class of black holes.

The research explored whether a dormant white dwarf star — sometimes referred to as a "zombie" star — could reignite if it had a close encounter with an intermediate-mass black hole. While data exists to corroborate the existence of supermassive black holes, there have been no confirmed observations of black holes in the intermediate class, which range in size from 100 to 100,000 solar masses. This intermediate class, the research team posited, might offer just the right amount of gravitational force to reignite a white dwarf before it’s torn apart.

The team ran supercomputer simulations of dozens of different close encounter scenarios to test this theory. Not only did they find that a close encounter would reignite the once-dead star, but they saw evidence that the process could create significant electromagnetic and gravitational wave energies that might be visible from detectors in near-Earth orbit. The research was published in the September issue of The Astrophysical Journal.

"It was exciting to see that the zombie star reignited in each of the close encounter scenarios we looked at," said LLNL physicist Peter Anninos, lead author on the paper. "But what really captured my imagination was the idea that these energetic events could be visible. If the stars align, so to speak, a zombie star could serve as a homing beacon for a never-before-detected class of black holes."

The simulations showed that the stellar matter fused into varying amounts of calcium and iron, depending on how close the star passed by the black hole. The closer the pass, the more efficient the nucleosynthesis, and the greater the iron production. All told, the research suggests that an "optimal" close encounter could fuse up to 60 percent of the stellar matter into iron. This peak mass conversion took place with a white dwarf passing at a distance of two or three black hole radii.

"The stretching phenomena can be very complicated," said LLNL physicist Rob Hoffman, coauthor on the paper. "Imagine a spherical star approaching a black hole. As it approaches the black hole, tidal forces begin to compress the star in a direction perpendicular to the orbital plane, reigniting it. But within the orbital plane, these gravitational forces stretch the star and tear it apart. It’s a competing effect."

"This entire project was made possible by our summer students and postdocs," Anninos said. "We’re all about training the next generation of physicists, and this sort of project allows early career researchers the chance to spread their wings and run some heavy simulations."

Collaborators on the paper included former LLNL postdoc Chris Fragile of the College of Charleston, LLNL undergraduate summer student Samuel Olivier of UC Berkeley and university collaborators Bhupendra Mishra of the University of Colorado and Karen Camarda of Washburn University.