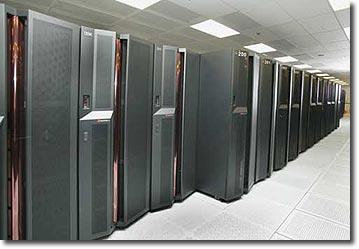 ARMONK, N.Y. — IBM announced today that it has scored a fundamental performance breakthrough in the way that massive computer networks access and share information.

The historic results were achieved on the Advanced Simulation and Computing (ASC) program’s Purple supercomputer – the third most powerful supercomputer in the world, according to the Top500 ranking.  ASC Purple, located at Lawrence Livermore National Laboratory, is a National Nuclear Security Administration computing system designed by IBM.

The breakthrough is expected to drive the development of data-intensive applications in areas including customized medicine, online gaming, entertainment, and homeland security, as well as in traditional high-performance computing applications.

In a joint effort code-named “Project Fastball,” IBM and LLNL demonstrated over 102 gigabytes per second of sustained read and write performance to a single file using specialized software that manages the transfer of information between thousands of processors and thousands of disk storage devices.  The world-record performance was achieved using 416 individual storage controllers combined with 104 Power-based eServer p575 nodes.

The resulting file system was a remarkable 1.6 petabytes in size – one of the largest high performance file systems currently deployed in the world.  Demonstrating the scalability of the system, the performance was maintained as over 1,000 clients drove workloads to the file system.