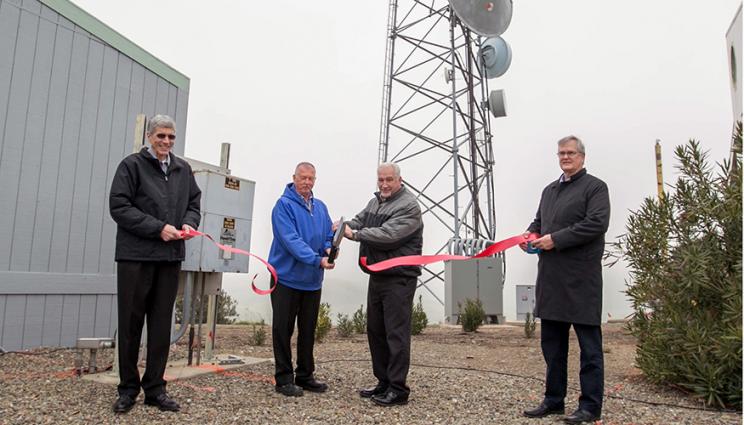 Site 300 Manager John Scott (in blue) cuts a ribbon with IT Project Manager Clay Dawson while Charlie Verdon (left) and Doug East look on, at the foot of a cell tower during a ceremony celebrating the addition of cellular service at Site 300.

Employees gathered in the hills between Livermore and Tracy on Tuesday to celebrate the addition of cellular service at Site 300. The celebration took place at the foot of a tower used to mount cellular antennas, one of four antenna locations that now provide coverage to much of the developed areas of the 7,000-acre experimental site. The driver behind the investment: employee safety.

"You may enjoy the fact that you can text your husband or wife during lunch, but the greatest gain from my perspective is safety," said Charlie Verdon, principal associate director of the Weapons and Complex Integration (WCI) Directorate, addressing Site 300 employees. "It’s a relief to know that our folks won’t be injured or stranded without the ability to call for help."

Before cell service was added, employees in the field could only communicate with radios, which were sometimes spotty. The new cell service now supplements the existing radio service. Three of the four antenna locations are now operating. The fourth and final location is scheduled to go live Jan. 31. While it was not the purpose of the project, about seven miles of Corral Hollow Road also will benefit from coverage-overflow once the final set of antennas is turned on.

"This project took help from just about everybody on-site. It was a huge team effort," said Clay Dawson, who managed this project. "There have been a lot of upgrades to Site 300. This will be a bountiful year for Site 300."

Service is limited to AT&T, but Dawson notes that Verizon coverage could be added at some point in the future. The choice to roll out AT&T coverage was based on two factors: Most LLNL issued cellular devices use AT&T, and AT&T was able to offer a more cost-effective installation option.

The project is the latest in a series of investments in the infrastructure and experimental capabilities at Site 300. Other improvements include replacing dated film cameras used for experiments with high-speed digital framing cameras, improving the ability to radiograph explosives assemblies and upgrading machining facilities used to prepare experiments. The work conducted at Site 300 supports the Stockpile Stewardship Program, as well as the counterterrorism and nonproliferation programs at the Laboratory.