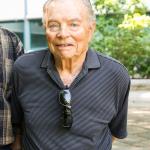 Scanlin was born April 16, 1932 in Philadelphia.He married the love of his life, Dori on June 26, 1954. He received his bachelor of science in mechanical engineering in 1954 from Penn State, and worked at Picatinny Arsenal in Dover, New Jersey from 1954 through 1961.

In 1961 he began a 59-year career at Lawrence Livermore National Laboratory.  He spent his career in the weapons program, where he was responsible for the design of nuclear weapons and devices and was the responsible design physicist for at least 93 underground nuclear experiments at the Nevada Test Site. He was regularly promoted throughout his career and served as a project leader for many pivotal projects throughout the weapons program, including deputy division leader for B Division, deputy associate director for Nuclear Design and deputy associate director for Military Applications. In 1991 he retired as the principal deputy associate director for defense systems. He also was a member of the Army science board for eight years and was a member of many other important international science and nuclear security boards and committees including with the Department of Energy.

In his 2010 autobiography “No regrets: I’ve Enjoyed a Great Life,” he cites witnessing a nearly 8-million-ton thermonuclear explosion at Christmas Island in 1962, “one of my most memorable life experiences my life.” He was involved in the Cannakin event, a full-scale underground nuclear test of the Spartan system. Scanlinl participated in a number of blue-ribbon panels in Washington, DC, centered largely around the question of whether underground nuclear testing was needed to maintain a safe and reliable stockpile

After retiring he continued to work on special projects at LLNL until March 2020, when the Laboratory went into a shelter-in-place posture due to the COVID-19 pandemic.

While he enjoyed a challenging and demanding career, he was able to engage in hobbies such as flying his plane for more than 50 years, belonging to a yacht club for decades, and traveling the world with his wife.