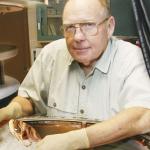 Barbee was born in San Diego to Anita Barbee and Troy W. Barbee Sr. He attended Hoover High School, where his drive and talent brought him notice as a football player, earning an athletic scholarship to Stanford University.  He earned three degrees at Stanford, a bachelor’s degree in physical metallurgy, and a master’s degree and a Ph.D. in materials science and engineering. During his undergraduate years, he met his first wife, Ann Hagey, with whom he raised four children while living in Palo Alto.

After earning his Ph.D., he worked as a materials scientist at the Stanford Research Institute before becoming the associate director of the Center for Materials Research at Stanford. It was during this time that he was first recognized by the Materials Office of the National Science Foundation for the making of new materials with multilayer synthesis technology. After 25 years at Stanford, he joined Lawrence Livermore National Lab, directing a research lab there for the next 30 years. During a career spanning more than 50 years, he published more than 300 peer-reviewed journal articles, edited two books, was awarded 28 patents and received four R&D 100 awards. He was a gifted inventor and remained at the forefront of multilayer and nanotechnology research until his retirement in 2015. The materials and processes he developed led to new optical instruments for soft X-rays, with applications from astronomy to semiconductor manufacturing.

A celebration of life will be held on the Stanford campus on Sunday, March 15 at 2 p.m. at Jimmy V’s Sports Cafe, located at 641 Campus Drive, Stanford. In lieu of flowers, the family suggests donations in his memory to the Native American Cultural Center at Stanford (http://nacc.stanford.edu) or the Yosemite Conservancy (http://yosemite.org).