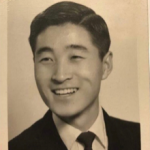 Kang was born in 1935 in North Korea. He studied physics at Seoul National University for two years. In 1955 he was awarded a scholarship offered by the Army Officers’ Wives Club and enrolled at the University of California, Berkeley. After graduation from Cal in mechanical engineering, he attended graduate school at Rensselaer Polytechnic Institute in upstate New York.  After receiving his Ph.D. from RPI in 1964, he began his career at Cornell Aeronautical Lab in Buffalo, New York, where he worked on the space program, including studying hypersonic viscous flows and reentry plasmas.

In 1976 he came to Lawrence Livermore National Laboratory as a physicist, where he remained until his retirement in 1998.  A member of several organizations including H-division (physics) and engineering, he worked on a wide variety of projects ranging from heat transfer in magnetrons, nuclear winter, coal gasification, and atmospheric shock propagation from outdoor high-explosive experiments at Site 300.

His beloved wife Hildi preceded him in death in 2019. He is survived by daughter Laura Chan-ju Kang-Ward, sons David Chan-oong Kang and Steven Chan-ho Kang, and five grandchildren.