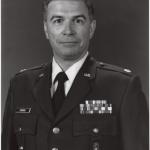 Cunning was born in Toledo, Ohio to Clifford Charles Cunning and Hester Louise Cunning on April 22, 1948.  He had one sibling, Gerald (Jerry) Charles Cunning. He graduated with a bachelor of science degree from Bowling Green State University in 1970. He entered the U.S. Air Force (USAF) through the Reserve Officer Training Corps as a second lieutenant. As an officer in the Air Force, he primarily served in operating our nation’s Inter-Continental Ballistic Missile (ICBM) forces.  He held numerous positions of increasing responsibilities and rapidly rose through the ranks, ultimately being promoted to Colonel prior to his USAF retirement.

He moved to a second career at Lawrence Livermore National Laboratory, serving in an executive assistant role to the Lab’s Director.  He provided the Director with strong administrative assistance, to include creation of presentation materials used by the Director when addressing national and international leaders, both in the scientific and political arenas.  He also led the team responsible for the Lab’s website.

In lieu of flowers, monetary gifts may be made to United Lutheran Church, 649 Northgate Drive, Manteca.