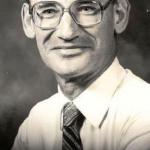 Hammond was born on Oct. 7, 1934 to Hilda and Stan Hammond. He was a native of the United Kingdom and was raised in London. He attended Cambridge University and received a Ph.D. in chemistry. He worked as a research chemist for Michelson Lab and Lawrence Livermore Laboratory

He is survived by his daughter Marion Mathis. He is preceded in death by his wife of 38 years, Margaret Hammond and his daughter, Alison Hammond.

In lieu of flowers, contributions may be made to the Santa Cruz SPCA, 2601 Chanticleer Ave., Santa Cruz, CA 95065.