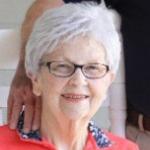 King was born on April 20, 1946 to Robert and Frances McMackin in Phoenix. She attended Northern Arizona University. She married husband, Walt, in 1970 , and moved to Washington D.C. area, where their first daughter Kari was born. Walt's career path then took them to California where they welcomed their daughters Suzanne and Robin. After the girls were grown she accepted a position at Lawrence Livermore National Laboratory where she spent 15 years. King and Walt retired in 2004 and built a home in Star, Idaho.

King was involved in both church and her community, collecting egg cartons for the food bank, working food drives, driving folks to medical appointments, taking in meals, and baking loaves of her famous banana bread for new neighbors or anyone she thought needed some cheer. Most importantly, she never missed a ballgame, concert or play that one of her grandkids was in.

She is survived by her husband Walt; daughters Kari King-Fox, Suzanne Nichols (Tory), Robin Edwards (Justin) and her grandchildren Logan, Preston, Paisley, Nicholas and Kameron. She is proceeded in death by her father, mother, brother and son-in-law Ernie Fox.

Due to COVID-19 there will be no traditional funeral service; private graveside interment will be at the Idaho State Veterans Cemetery.