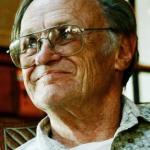 Borch was born on Aug. 4, 1930, in Fort Dodge, Iowa, to Lilly Merete Hein and Ole Gotfred Borch. He attended Pasadena City College and University of California Berkeley, with studies in metallurgical engineering, though the Korean War interrupted his education for a few years. The Army trained him as a field radio repairman at Camp Gordon, Georgia, to prepare him for the front lines. But fate and luck intervened. During training, he and a friend refurbished a small motorboat for fun. They caught the eye of a Colonel, who diverted them from the battlefield to a posting on American Lake in Washington, servicing boats for Fort Lewis.

He obtained a master of science in Physical Metallurgy from UC Berkeley in 1957 with a focused study on the properties of beryllium and a groundbreaking thesis on deformation in metals. His education led to a career in materials science with Texas Instruments, Stauffer Chemicals, Lawrence Livermore Laboratory, and finally Los Alamos National Laboratory. He served the national labs for over thirty-one years. In his career, he was granted several patents, focusing on innovative scientific instruments, and, for a short time, he designed and manufactured a precision device used to prepare samples for electron microscopes. He published papers in Metallurgical Transactions (1971) and Nature (1987).

An online memorial will be held on Saturday, Sept. 10 at 11:00 a.m. (mt). Please RSVP to nielsborchmemorial [at] gmail.com to receive a link.