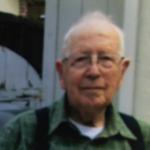 Gregory was born in Fort Thomas, Kentucky, on May 8, 1925, to Lewis and Ruth Gregory. Drafted to the Army in 1943, he served in World War II with the 95th infantry division and was discharged in 1946. After serving his country, he attended Wilmington College in Ohio, graduating with a double major in chemistry and biology. Unable to find a chemistry job in Cincinnati, he worked as a sales clerk at a local department store. There he met his late wife of 63 years, Mary Louise Hahn.

He found work in his field at Drackett’s and worked in Oak Ridge, Ohio, until coming to General Electric in Cincinnati. When GE went through a downsizing and he was laid off, he applied at the Lawrence Radiation Lab. From 1962-86 he worked in analytical chemistry. After retirement he worked as a consultant for the Lab. He was involved in music, singing in the Las Positas College choir, but mostly focused on singing sacred music with the choirs of St. Michael and St. Charles Borromeo Catholic churches.

A funeral mass will be scheduled at St. Charles Borromeo in Livermore when the church opens for normal business.