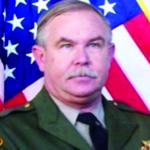 Rock was born May 10, 1955 in Landstuhl, Germany, and was one of two children to Carvis and Stefanie Rock. He graduated from Livermore High School in 1974.  He worked at General Electric Vallecitos and Lawrence Livermore National Laboratory as a security officer before pursuing his career in law enforcement. He attended the Contra Costa County Sheriff’s Academy and graduated second in his class in December 1981.

He retired from Contra Costa County serving the community he loved for more than 20 years.

He will be laid to rest at Cherokee Memorial Cemetery in Lodi. Funeral and services will be announced at a later date.