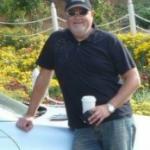 De Leon was born to Esdras DeLeon and Eloisa Hernandez on Aug. 11, 1960 in French Camp, California. He grew up in Tracy and graduated from Tracy High School. He earned his bachelor’s and master’s degrees from the University of California, San Francisco in computer science and was employed at the Lawrence Livermore National Laboratory for more than 30 years.

He is preceded in death by his mother, Eloisa. and brother, Anthony. He is survived by his father, Esdras De Leon; sisters Linda Salazar and Norma Flores; and brother, Steve De Leon.