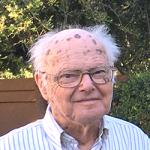 Hedstrom was born on July 31, 1933, in Kenosha, Wisc., to Gladys and Gustav Hedstrom. He graduated from Mary D. Bradford High School in Kenosha in 1951. He then went to the University of Wisconsin at Madison, earning a B.S. in physics in 1955 and a Ph.D in mathematics in 1959. After obtaining his Ph.D, he worked as a mathematician for over 50 years. Hedstrom started his career at the University of Michigan (1959-1968), then at the Case Western Reserve University (1968-1977). During his time at CWRU, he was a consultant with Lawrence Livermore National Laboratory (LLNL). In 1977, he was hired full-time at LLNL and worked there in a variety of roles, including seismology and nuclear data, until his retirement in 1999.

In 2000, Hedstrom was asked to return to LLNL as a contractor. As it turned out, his knowledge and skills in nuclear data and computational nuclear physics were in demand. He continued to work as a contractor for many years before retiring a second time. After his second retirement, Hedstrom continued to interact with the the nuclear data community and LLNL, and even wrote a paper that was published in a peer-reviewed journal in 2017 at the age of 84. Some of his codes are still used today to process nuclear data. Hedstrom was a great mentor and taught classes at LLNL. When Kim Budil became director of LLNL, Hedstrom recalled having her as a student and commented that he was very impressed by her abilities.

Hedstrom spent two years as a visiting professor at Chalmer's Institute of Technology in Gothenburg, Sweden (1966-67 and 1971-71). He taught in English the first year and in Swedish the second year. Though the students are expected to know enough English to understand the material, he once noted that they were more likely to ask questions when he taught in Swedish.

Hedstrom was active in the Pleasanton Community Concert Band where he played percussion. He played clarinet in the marching band in high school and at Madison, and taught himself percussion as an adult.

His other interests included woodworking and travel. Hedstrom and his wife traveled all over the world, taking tours with a focus on the local crafts. He loved the outdoors and would go on many hikes, and he also enjoyed sea kayaking with a small tour company.