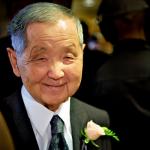 Ree was born in Kyoto, Japan in 1936, where his father, Taikyu Ree, was a professor at Kyoto Imperial University. At the end of the World War II, the family moved to South Korea. He came to the United States in 1954 to study physics, receiving his doctorate from the University of Utah in 1960 at the age of 23; he joined the LLNL physics department that same year.

Ree was a group leader of the Organics and High Explosives group in H Division. He developed a computer code, CHEQ, applicable to high-temperature, high-pressure chemically reactive systems, with special emphasis on explosives properties, equations-of-state and relevant chemical kinetics. He worked to improve basic theories behind CHEQ and to generate relevant data. He received the DOE Award of Excellence in 1998, and LLNL Physics Distinguished Achievement Awards in 1989 and 1999.

Ree was the first Korean-American physicist at LLNL and an active member of the Asian Pacific American employee resource group.

He is survived by his wife, Clara Ree; daughter, Christina; son, Peter; and two grandchildren, Junobi and Lila. He will be buried in the Mountain View Cemetery in Oakland after funeral services on Friday, Jan. 31, at Chapel of the Chimes, 4499 Piedmont Ave. in Oakland.