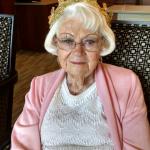 Foster born in Huntington, Utah, on July 14,1924. After graduating from high school, she moved to Salt Lake City. When the United States asked women to join the workforce to support World War II efforts, she quit her office job and went to work in an ammunition factory making wooden ammunition boxes. She met her future husband, Kenneth, a submarine sailor, who was on leave traveling by train across the country.

She and Kenneth were married and after the war ended, they settled in Utah. Two years later they moved to Albuquerque, New Mexico. She went to Albuquerque Beauty College where she became a certified beautician. In 1959, Kenneth transferred to Sandia National Laboratory in Livermore. She went to work at Lawrence Livermore Laboratory. She worked as a procurement specialist until her retirement.

Foster was active in the Submarine Veteran of WWII Dolphin Women’s Club, serving in local and national offices.  She was a member of The Livermore Symphony Guild and the social group The Red Hatters.  She played bridge for 57 years and continued a weekly bridge game at Sagewood until the last few months of her life.

She was preceded in death by her mother, Perdita (Brockbank) Guymon, and father, Albert Eugene Guymon. She was also predeceased by her husband of 60 years, Kenneth Grady Foster Jr. She is survived by a brother, Burton Guymon (Karen); one son, Kenneth Gene Foster (Patricia); three daughters, Diana Zirkle (Lynn); Susan Cannon (Val); and Carrie Fritsch (Timothy). She is survived by 12 grandchildren; 20 great-grandchildren; and two great-great-grandchildren. The family will miss her.