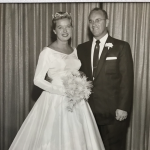 Strain was born in St. Louis, Missouri, to Andrew and Bertha Strain, on Jan. 10, 1927. After his father died in 1933, his mother moved the family to Gerald, Missouri, where he attended  grammar school. He graduated from Union High School. He spent his early years traveling around the world as a merchant marine before he was drafted into the Army. In 1948, he and his brother, Andy, moved to Salt Lake City to attend the University of Utah.

Strain graduated early on the GI Bill with a bachelor of science degree in physics. He was hired by California Research and Development (CR&D), later known as Lawrence Livermore National Laboratory in 1952, as a theoretical physicist. There he met, and later married, Mary Tolle. In 1956 the draw of a nuclear Vallecitos Boiling Water Reactor (VBWR) being built at Vallecitos Nuclear Laboratory enticed him to apply at General Electric, where he worked for 35 years.

He is survived by his three daughters, Sandra “Sandy” Jackson, Laura Dunkerly (Bill), and Maria Strain (Dave Weaver). He was the proud grandpa (Pop) of seven grandchildren, Russell Jackson (Karlie), John Garrett Jackson (Amanda), Holly Parker (Jake), Julie Mancini (Brian), Wyatt Dunkerly, Georgia Dunkerly and Crystal Geronimo (Randy); 12 great-grandchildren; many nieces and nephews; his sister Virginia; and his neighbor who was like a son, Alan Madsen. He was preceded in death by his wife of 62 years, Mary, on Feb. 15, 2021 and brother, Andrew, in 2014.

There will be no services, per his request. In lieu of flowers please donate to the charity of your choice.