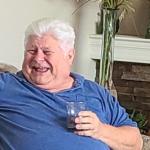 Griffin was born in Evansville, Indiana, January 9, 1946, to Jewel and Doris Griffin. On Jan. 28, 1966, he enlisted in the U.S. Navy as a submarine electronics technician and attended the Naval Nuclear Power School class of 1968. His duration of service was six years with three years of foreign/at sea service. He served aboard the USS Henry Clay.  While enlisted he earned a National Defense Service Medal, Good Conduct Award, and a Meritorious Unit Commendation. He was honorably discharged on Sept. 16, 1971.

On Feb. 15, 1969, he married Kathleen Brown in Absecon, New Jersey. The pair eventually settled in Livermore, where he began his career at the Lawrence Livermore National Laboratory in nuclear defense. During his career at LLNL he often split his time between LLNL and Pantex Defense Nuclear Facility in Amarillo, Texas where he worked on a nuclear decommissioning program as part of a multinational treaty. He retired in 2007 after 25 years of service as an information system security officer overseeing classified computers and the information exchange of classified information.

The family will hold a celebration of life to honor his memory in spring of 2022. Everyone who remembers him is asked to celebrate his life in their own way, raising a glass of their favorite drink in his memory.