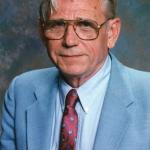 McFann was born on Feb. 8, 1926, in Mishawaka, Indiana, to Iva (née Jackman) and Charles B. McFann, Sr., but spent most of his childhood in Southern California. He graduated from the University of Denver in June 1952, with a degree in mechanical engineering with honors. He began his engineering career in the Southern California aerospace industry before moving to Livermore in 1962, where he worked at the Lawrence Livermore National Laboratory for more than 20 years.

After retirement from LLNL, he was a consultant for several companies in Silicon Valley. He was a WWII veteran who enlisted in the Navy on his 17th birthday. He saw action in the South Pacific as a turret gunner in a torpedo bomber. He was on the same ship as future President Gerald Ford, and in the same task force as future President George H.W. Bush. He took part in the atomic bomb testing at Bikini Atoll.

McFann was an active member in the Livermore Art Association and the Livermore Heritage Guild. He singlehandedly renovated his historic home in Livermore, and an old cottage on South K Street, plus restored old cars and photographs. He was instrumental in the restoration of the antique fire engines at the Duarte Garage and Lincoln Highway Museum in Livermore.

He is survived by four sons and their wives; Gregory and Josephine, Brian, Garret and Julie-Ann, Kent and April; a brother, John McFann, and his wife Shelby; and five grandchildren, Steven, Caitlin, Donovan, Aidan and Mark McFann. He was preceded in death by his wife, Virginia E. McFann; and sister, Joan Dougherty.

The family would like to give special thanks to his longtime caregivers, Zakia Hazrati and Renata Ortloff, for giving of themselves so selflessly during his long illness. Memorial arrangements are pending. In lieu of flowers, the family requests donations to either the Livermore Art Association or Heritage Guild.