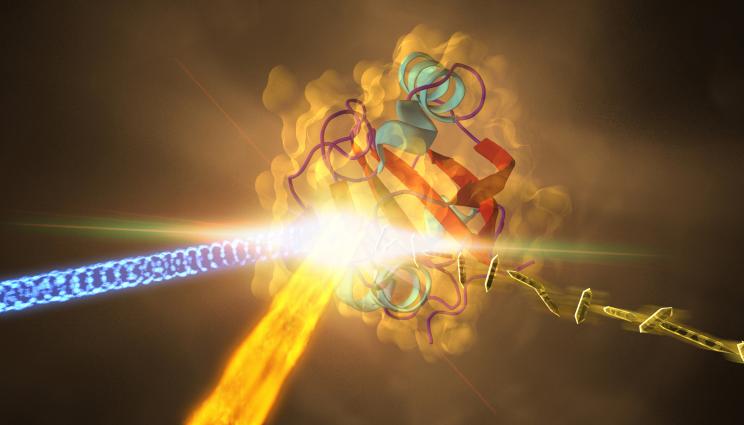 This artist’s rendering depicts an experiment at SLAC that revealed how a protein from photosynthetic bacteria changes shape in response to light. Samples of the crystallized protein (right), called photoactive yellow protein or PYP, were sprayed into the path of SLAC’s LCLS X-ray laser beam (bottom left). Some of the crystallized proteins had been exposed to blue light (left) to trigger shape changes. Diffraction patterns created when the X-ray laser hit the crystals allowed scientists to re-create the 3-D structure of the protein (center) and determine how light exposure changes its shape. Image courtesy of SLAC National Accelerator Laboratory.

An international research team that includes researchers from Lawrence Livermore National Laboratory has captured the highest-resolution protein snapshots ever taken with an X-ray laser, revealing how a key protein in a photosynthetic bacterium changes shape when hit by light.

Human biology is a massive collection of chemical reactions and all involve proteins, known as the molecules of life. Scientists have been moving steadily toward their ultimate goal of following these life-essential reactions step by step in real time, at the scale of atoms and electrons.

"These results establish that we can use this same method with all kinds of biological molecules, including medically and pharmaceutically important proteins," said Marius Schmidt, a biophysicist at the University of Wisconsin-Milwaukee who led the experiment at the Department of Energy’s SLAC National Accelerator Laboratory. "We are on the verge of opening up a whole new unexplored territory in biology, where we can study small but important reactions at ultrafast timescales."

The results, detailed in the Dec. 5 issue of Science, have implications for research on some of the most pressing challenges in life sciences, which include understanding biology at its smallest scale and discovering molecular targets for drug design.

The experiment took place at SLAC’s Linac Coherent Light Source (LCLS). LCLS’s X-ray laser pulses, which are about a billion times brighter than X-rays from synchrotrons, allowed researchers to see new atomic-scale details of how the bacterial protein changes within millionths of a second after it is exposed to light.

The experimental station used in the study, LCLS pulses, measured in quadrillionths of a second, work like a super-speed camera to record ultrafast changes, and snapshots taken at different points in time can be compiled into detailed movies.

"This experiment marks the first time that LCLS has been used to directly observe a protein’s structural changes at such a high resolution as it happens," Frank said.

The protein the researchers studied, found in purple bacteria and known as PYP for "photoactive yellow protein," functions much like a bacterial eye in sensing certain wavelengths of light. The mechanism is very similar to that of other receptors in biology, including receptors in the human eye.

"Though the chemicals are different, it's the same kind of reaction," said Schmidt, who has studied PYP since 2001. Proving the technique works with a model protein like PYP sets the stage to study more complex and biologically important molecules at LCLS, he said.

In the LCLS experiment, researchers prepared crystallized samples of the protein, and exposed the needle-shaped crystals, each about 2 millionths of a meter long, to optical laser light before jetting them into the LCLS X-ray beam.

The incident X-rays produced diffraction patterns as they struck the crystals, which are used to reconstruct the 3-D structures of the proteins. Researchers compared the structures of the light-exposed proteins to structures of proteins that had been held in the dark to identify light-induced structural changes.

"In this work, we were observing structural changes on a microsecond timescale that were essentially known previously in order to demonstrate the potential of this method," Frank said. "We are looking forward to our next series of LCLS experiments in 2015, where we will enter uncharted territory and will attempt to probe structural changes in the same protein on much shorter time scales."

"In the future we plan to study all sorts of enzymes and other proteins using this same technique," Schmidt said. "This study shows that the molecular details of life’s chemistry can be followed using X-ray laser crystallography, which puts some of biology’s most sought-after goals within reach."