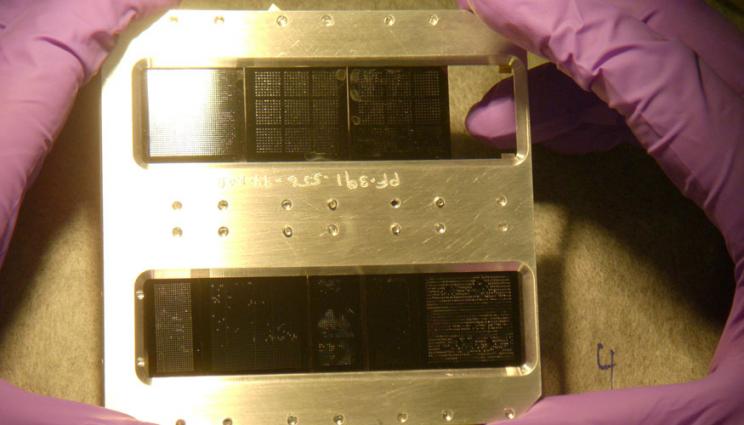 A holder is ready for mounting in the sample chamber at the Linac Coherent Light Source at the Stanford Linear Accelerator Center (SLAC) National Accelerator Laboratory. The square and rectangular substrates that are mounted in the holder are silicon wafers with ultra-thin silicon nitride membranes carrying protein crystal samples. LLNL is a partner institution of the new Biology with X-ray Free Electron Lasers (BioXFEL) research center, headquartered at the University at Buffalo.

This is the first Science and Technology Center grant UB has received. With the grant, UB and its partner institutions will establish the Biology with X-ray Free Electron Lasers (BioXFEL) research center, headquartered in Buffalo. Lawrence Livermore National Laboratory (LLNL) is a partner institution of the BioXFEL center.

This technique has the potential to spur much-needed innovation in the pharmaceutical field. It will provide scientists with new insights into how biological molecules function, what might be happening when disease occurs and what compounds might be designed as drugs to modify this activity.

Since the early 2000s, LLNL has been a pioneer in the field of biological imaging at XFELs by conducting theoretical studies and the first proof-of-concept experiments at soft x-ray laser light sources. LLNL also has been a major contributor to the first biological imaging experiments at the Linac Coherent Light Source (LCLS), the world's first hard X-ray free electron laser that became operational in 2009 at the Stanford Linear Accelerator Center (SLAC) National Accelerator Laboratory and is currently developing methods for dynamic (time-resolved) imaging that is aimed at producing "molecular movies" of biomolecular interactions using XFELs.

"Together with its partners, UB is especially proud to announce this highly competitive award," said UB President Satish K. Tripathi. "NSF selects just a handful of Science and Technology Center winners every four years from a pool of hundreds of applicants. This research builds on Western New York's rich legacy of expertise in X-ray crystallography, historically based within the Hauptman-Woodward Medical Research Institute and UB's Department of Structural Biology."

Eaton Lattman, professor in the UB Department of Structural Biology in the School of Medicine and Biomedical Sciences and chief executive officer of the Hauptman-Woodward Medical Research Institute (HWI), will be director of the BioXFEL center.

LLNL will collaborate with the BioXFEL center and contribute novel technologies for biological sample introduction and time-resolved measurements in two- and three-dimensional protein nanocrystallography, as well as modeling the effects of X-ray damage during the measurements.

Research and development for these areas at LLNL are currently supported by an ongoing internally funded project led by Matthias Frank and involves multiple experimental campaigns at LCLS. Other LLNL collaborators for the BioXFEL center include project team members Matthew Coleman, Mark Hunter, Stefan Hau-Riege and Brent Segelke.

"Being part of this new BioXFEL center is expected to help strengthen existing collaborations with BioXFEL research institutions at universities, such as Arizona State University and CFEL Hamburg, and provide exciting new opportunities to work closely with the other partners," Frank said.

The establishment of the BioXFEL center will put UB and Western New York in the forefront of this technology. "It has the potential to transform the way scientists study diseases and develop new treatments," said Alexander N. Cartwright, vice president for research and economic development at UB.

"The late Dr. Hauptman won the Nobel Prize in 1985 with Jerome Karle for the development of direct methods for determining the structures of molecules. This new UB center, in partnership with HWI, will take the extraordinary promise of that 20th-century technique and revolutionize it further for the 21st century."

While current techniques in crystallography provide almost 90 percent of what scientists know about biomolecular structure, fewer than 20 percent of purified proteins currently form the crystals necessary for this technique.

In this video interview produced by UB, Lattman explained the research objectives and potential impact of the BioXFEL center.

"With the new bioimaging technique developed in the BioXFEL center, we will be able to analyze crystals 1,000 times smaller than the ones we can use now," Lattman said. "These are crystals we could never use before and, in fact, may not have known existed. A whole new universe of drug targets will become accessible for study as a result."

"In addition," added Spence, "we will be developing new techniques for making movies of molecular machines at work, and of viruses and biomolecules in their natural wet environment undergoing chemical change. Some of the work, with Professor Petra Fromme at ASU, will try to image the detailed atomic processes responsible for photosynthesis. This occurs when sunlight falls on all green plants, allowing them to split water, creating the oxygen we breathe and break down the carbon dioxide responsible for global warming."

"The techniques the BioXFEL center will develop could shorten the process of determining protein structure from years to days," said Ourmazd of the University of Wisconsin-Milwaukee. "This will rely heavily on mathematical algorithms we and others are developing to deduce structure from millions of ultralow-signal snapshots."