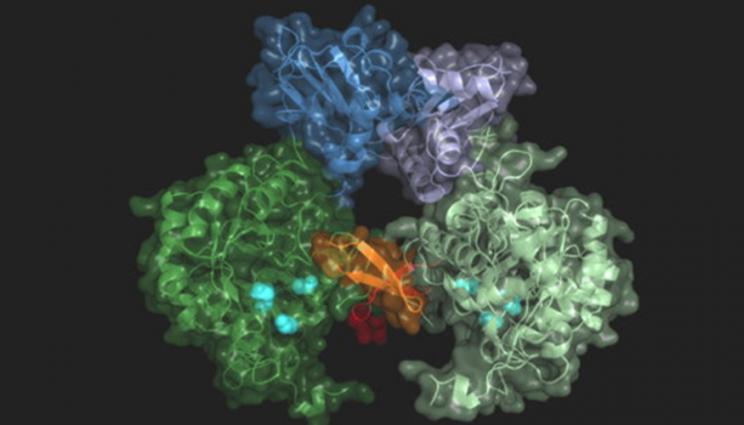 The structure of the sleeping sickness parasite's IMP dehydrogenase. Using X-ray flashes, scientists are gaining greater understanding of the parasite that causes the disease. Credit: University of Lübeck/DESY, Lars Redecke

The scientists decoded the detailed spatial structure of a vital enzyme of the parasite Trypanosoma brucei. The result provides a possible blueprint for a drug that specifically blocks this enzyme and kills the parasite. The research appears in Nature Communications.

Sleeping sickness (African trypanosomiasis) is a tropical disease caused by Trypanosoma brucei, which is transmitted by the bite of tsetse flies that inhabit much of tropical Africa. In the body, the parasite first multiplies under the skin, in the blood and in the lymphatic system and then migrates to the central nervous system. If left untreated, the disease is almost always fatal.

Thanks to intensive control measures, the number of registered cases has fallen dramatically in recent years. Nevertheless, sleeping sickness is still considered one of the most significant tropical diseases. According to the World Health Organization, more than 60 million people in rural areas of sub-Saharan Africa are at risk. War, displacement and migration can cause the disease to flare up.

Recent developments in serial crystallography data collection strategies at both X-ray free-electron lasers (XFELs) and synchrotron sources have paved the way for the use of protein crystals with dimensions in the nano- to low-micrometer-size range as suitable targets for X-ray crystallography. XFELs produce radiation bursts of previously inaccessible brilliance and femtosecond duration that allow outrunning most radiation damage processes. Because of the improved X-ray intensities, small crystals formed within living cells, denoted as "in cellulo crystals" or "in vivo grown crystals," became interesting for structural biologists.

In the newly published research, the team isolated the enzyme Inosine-5′-monophosphate dehydrogenase (IMPDH), found in the sleeping sickness parasite, to look at its structure using in cellulo protein crystallization and serial femtosecond crystallography.

“This enzyme belongs to the central inventory of every organism and is an interesting target for drugs because it regulates the concentration of two vital nucleotides in the cell: guanosine diphosphate and guanosine triphosphate,” said Lars Redecke, from the University of Lübeck and Deutsches Elektronen-Synchrotron (DESY). “The cell needs these nucleotides to supply energy and to build larger structures such as the genome. If you interrupt this cycle, the cell dies.”

The enzyme has a kind of on/off switch that is activated by the docking of the cell's own molecules. A promising approach is to block this switch with a precisely tailored molecule. To construct such an inhibitor, the exact spatial structure of the switch must be known. Structural biologists can determine the structure of biomolecules using X-rays. To do this, they first grow small crystals from the biomolecules, which then generate characteristic diffraction patterns when illuminated with X-rays. From these patterns the atomic structure of the crystal and its building blocks, the biomolecules, can be calculated.

“The structural data we present are a starting point in this direction and highlight the potential of intracellular protein crystallization to select specific compounds from the sleeping sickness parasite that may better treat the patient,” said LLNL scientist Matthias Frank, who helped conduct the experiments at the Linac Coherent Light Source at SLAC National Accelerator Laboratory. “The specific inhibitor we identified could disrupt a biological pathway that is pivotal for the parasite’s life.”

A remaining challenge is to design the IMP dehydrogenase inhibitor in such a specific way that it blocks the parasite's enzyme, but not the human enzyme. If this is successful, the method could potentially be extended to other pathogens.

The LLNL portion of the work was funded by the University of California Office of the President Lab Fee Program and LLNL’s Laboratory Directed Research and Development fund.