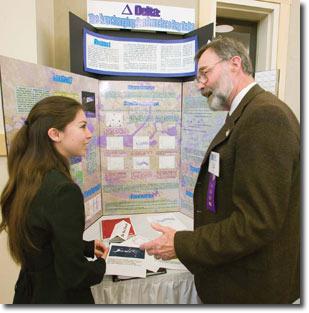 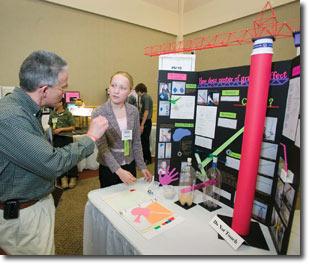 More than 300 local students in grades 7 through 12 competed for cash and other prizes at the 10th annual Tri-Valley Science and Engineering Fair (TVSEF) sponsored by the Lawrence Livermore National Laboratory. Judging took place on Wednesday, March 29, at the Robert Livermore Community Center in Livermore, with awards distributed during a ceremony there that evening. This marks the first year the TVSEF was held in Livermore.

Some 130 local scientists, engineers and science teachers served as fair judges, deliberating over this year’s 227 project entries. The majority of judges represented the Livermore Laboratory. A total of 237 awards were presented.

Sweepstakes winners in the Senior Division category were Mina Bionta, a twelfth grade student from Livermore High School, whose project was “The Ever-Changing San Francisco Bay Delta,” and Farnoosh Nik-Ahd, an eleventh grade student from California High School in San Ramon, whose project was “Role of Keratin Mutations as Susceptibility Genes for Liver Disease in Afro-Americans.”

Science projects were judged on a wide range of criteria that represent standards of research held by the scientific community. Participants attend public, private or parochial schools in Danville, Dublin, Livermore, Pleasanton, San Ramon and Sunol.

The goals of the annual fair are to motivate students to apply creativity and critical thought to the solution of science, engineering and math problems; to encourage the exchange of knowledge and ideas; and to recognize student achievement.

The Fair is affiliated with the Intel International Science and Engineering Fair (Intel ISEF), the world's largest pre-college celebration of science. Held annually in May, the Intel ISEF brings together more than 1,400 students from more than 40 nations to compete for scholarships, tuition grants, internships, scientific field trips, and the grand prize: a $50,000 college scholarship.

Click here for more information about the Tri-Valley Science and Engineering Fair.