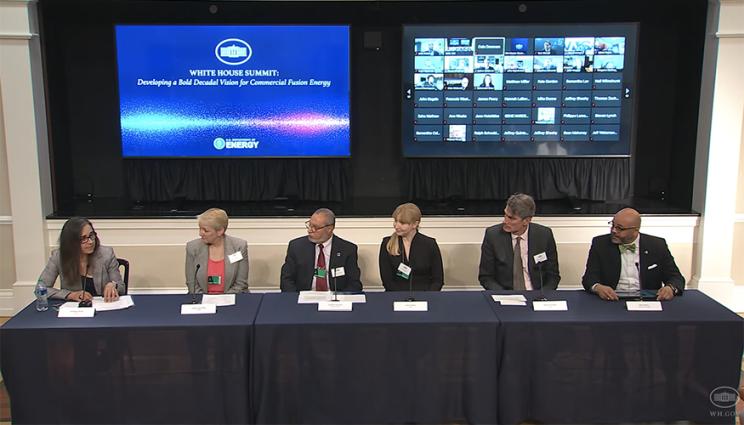 Lawrence Livermore National Laboratory Director Kim Budil (far left) served as moderator for the opening panel of the White House Fusion Summit on March 17, where experts from Department of Energy (DOE) national laboratories, academia and industry discussed the status and benefits of fusion technology. The event was co-sponsored by the White House Office of Science and Technology Policy and DOE.

Hosted by the White House Office of Science and Technology Policy (OSTP) and the U.S. Department of Energy (DOE), the first-of-its-kind summit convened leaders in fusion from government, industry and academia to showcase the latest fusion achievements and technologies, and discuss an inclusive, equitable 10-year strategy for developing commercial fusion energy.

DOE Secretary Jennifer Granholm opened the summit by highlighting progress made in fusion technology and discussed the need for building a pipeline of next-generation fusion scientists. She said commercial fusion could become one of several viable clean energy options to help the U.S. reach the Biden Administration’s goals of a carbon pollution-free energy sector by 2035 and net-zero carbon emissions by 2050.

“We believe we’re making progress, we’re getting close to ignition, but we also know that it’s going to take time before this is commercialized,” Granholm said. “It would be amazing if fusion were part of what I call — not the ‘silver bullet’ but ‘silver buckshot’ — of getting to that clean energy future. That’s what we’re striving for.”

To support accelerating commercial fusion energy, Granholm announced the launch of a DOE-wide initiative combining all fusion energy research across its program offices under one umbrella. The initiative will be led by a new DOE Lead Fusion Coordinator, Scott Hsu, currently a program director for commercial fusion at the Advanced Research Projects Agency-Energy (ARPA‑E). In addition, Granholm announced a funding opportunity for $50 million for basic fusion energy research to support design of a pilot magnetic fusion plant.

“The landscape around fusion research and development and demonstration is shifting, and so our strategy has to change with it,” Granholm said. “We are excited to be joining with the Office of Science and Technology Policy to craft a bold vision for this decade of driving commercial fusion toward acceptance, completion and maybe even deployment … We want to make sure we are putting our money where our mouth is.”

Budil said the summit comes at a “particularly exciting moment” for fusion, made possible by a long legacy of scientific leadership from DOE that has expanded from national security into energy programs. She emphasized the potential for fusion to contribute to a decarbonized energy future, stressing that the urgency and scale of the enterprise demands a new commercial fusion ecosystem of public-private collaboration.

“Fusion energy is the grand scientific challenge of our time and it’s going to require significant innovation and real leadership to realize it,” Budil said. “It has been a great year for fusion — we have had enormous breakthroughs in both magnetic fusion and inertial fusion that really make it realistic. We used to always say that fusion energy was 50 years away from whatever day you asked, and I would say that’s closing fast.”

Panelist Steven Cowley, director of the Princeton Plasma Physics Laboratory, called 2021 the “greatest year for fusion” — citing NIF’s record 1.3 megajoule yield as an “astonishing result,” coupled along with the achievement at the Joint European Torus (JET) of a record for sustained fusion energy during a five-second pulse. Cowley added that the ability for DOE supercomputers to predict plasma behavior is “an intellectual triumph, and one that will drive us to commercial realization.”

Budil cautioned that while the field has made significant advancements, much work remains, requiring “over-the-horizon science and technology” and new partnerships between DOE national labs, universities, private industry, utilities and communities, much like historic grand-challenge problems such as the atomic bomb and space exploration.

“These are the moments where the U.S. is great, this is where we really thrive,” Budil said. “It requires everyone to pull together … It requires the government to come together across agencies to coordinate, to drive this innovation and give us a real sense of urgency behind this problem. I am personally confident that this community can rise to meet this challenge, and I look forward to doing it with all of you.”

Throughout the three-hour livestreamed summit, government officials and fusion experts expressed optimism in the future of commercial fusion, buoyed by scientific and technical developments at NIF, JET, the International Thermonuclear Experimental Reactor (ITER) and China’s Experimental Advanced Superconducting Tokamak, as well as billions of dollars in new private investment and the sheer gravity of addressing energy security and looming climate concerns.

“We believe when it comes to fusion, the time is now,” said Alondra Nelson, interim director of the White House OSTP. “Fusion is one of a much larger suite of clean energy game-changers that can help America reach the goal of [net zero emissions by 2050], commensurate with the scale that climate change requires … We’re here today because the world is on fire; the climate crisis is causing people in this country and around the world to be displaced from their jobs, their homes and their communities.”

“We can tackle the injustice that we have in this world by investing and engaging wisely, and we can lead the world with new energies and innovation, and that is exactly what we are doing and why we are gathered today,” McCarthy said. “This technology holds tremendous promise, and if done right, it can distinguish itself as a better choice among many choices — moving forward on how we’re going to address climate change, keep people’s costs down and jobs growing.”

During the summit, Granholm and others noted that beyond technical innovation, key challenges for realizing commercial fusion in the next decade will be gaining public acceptance and trust in the technology, building a diverse and inclusive workforce and engaging in open dialogue with community leaders and stakeholders to both educate and assuage concerns about safety and security of the technology.

Speakers and panelists alike stressed that a decadal fusion strategy must include energy and environmental justice, ensuring that risks and benefits of fusion power are equally distributed and do not disproportionately impact marginalized or underserved communities.

“While capturing the power of fusion energy here on earth is thrilling science, it presents both promise and pause to the communities,” said Brenda Mallory, chair of the Council on Environmental Quality. “By working to integrate environmental justice on the front end of development, we have a chance to ensure that fusion energy benefits all communities and doesn’t repeat harmful mistakes that have happened in the past.”

Energy justice and community engagement were the main topics of the summit’s second panel, which brought together experts from DOE, academia and industry. Panelists expressed hopes that at this early stage of development, commercial fusion represents an opportunity to integrate equity and justice, include voices of underrepresented communities and environmental groups and could someday help restore areas impacted by pollution and other environmental damage.

“It only can create restorative justice if we are absolutely engaging communities on Day One,” said Shalanda Baker, DOE’s secretarial advisor on Equity and deputy director for Energy Justice in the Office of Economic Impact and Diversity. “We’ve got to weave in diverse perspectives from the beginning, beginning with the R&D, the corporations that will be engaged in this — making sure the boards are diverse, that the staff is diverse … We absolutely must be engaged in communities and thinking about how they come to the table.”

Amanda Chambliss, a student researcher at Princeton Plasma Physics Laboratory through the DOE Office of Science’s Science Undergraduate Laboratory Internships program, said it will be critical to engage students in underserved communities and use approachable language when introducing fusion to undergraduates.

“There are fancy words we can use, but at the end of the day we can just approach students and say, ‘hey we’re using these really twisty coils that form a really strong magnetic field and we’re using that to trap star stuff. And we’re trying to use that star stuff to solve one of the greatest problems that humanity has ever faced, and that’s climate change,’” Chambliss said. “When you say it that way, who doesn’t want to do that for work every day?”

The day’s third and final panel focused on the vision for the fusion industry, as it moves from proof of concept toward realization of pilot fusion plants, which panelists said could happen by the 2030s. Representatives from several fusion companies and the Fusion Industry Association discussed sharing of best practices, promoting diversity in the fusion workforce, attracting talent to the U.S. and working with national laboratories and regulatory bodies.

“We’re at an incredible point where the science and technology is starting to meet up to the challenge, and what the private sector is bringing is the ability to take that into the vision and direction you need to build a practical power plant,” said Michl Binderbauer, co-founder and CEO of TAE Technologies. “Now I think we’ve conquered a lot of these [technical challenges] and they’re really getting ready … I think there’s a great synergy [with the national labs] to drive this to a pathway to get there fast.”

Panelists also spoke of the importance of determining an appropriate regulatory framework for commercial fusion, with regulations balanced between being too overbearing — which could slow down development — and not strong enough.

The event concluded with calls to action from OSTP Deputy Director for Energy Sally Benson and DOE Under Secretary for Science and Innovation Geraldine Richmond. Benson expressed the need to take immediate steps to make fusion “another clean energy success story,” in line with past public/private investments in solar and wind power, and electric vehicles.

“Decades from now, let’s look back at this moment in this room, when we acted boldly again to make the impossible possible, and we acted boldly together to make fusion energy, sunlight in a bottle, a reality,” Benson said.

Richmond called the event a “unique opportunity to build a new energy industry that’s truly representative of America,” and reiterated DOE’s plans to accelerate commercialization by partnering with industry under the new department-wide fusion initiative. The effort will integrate fusion energy research and development activities across the DOE Office of Science, ARPA-E, the National Nuclear Security Administration and DOE Office of Nuclear Energy. Richmond said the approach will allow the agency to pursue multiple pathways to a pilot fusion plant and ensure a greater degree of success in ushering in the commercial fusion industry.

“We will continue to rely on the top scientific and engineering minds at the DOE laboratories, and universities as a source for ideas and innovation for the future. And our work with the private sector will take on new urgency, so we can find synergy between the exciting developments in the fusion industry and the unique capabilities supported by DOE,” Richmond said. “DOE will help clear the path toward commercialization in whatever way we can.”

“With these investments, DOE will initiate a new milestone-based public private partnership and continue the important research construction work happening in the DOE’s Office of Fusion Energy Sciences,” Beyer said.

The summit concluded with private breakout rooms for attendees and guests centered on issues including diversity, equity and inclusion, commercialization and public-private partnerships.

Click here to view a recording of the summit.