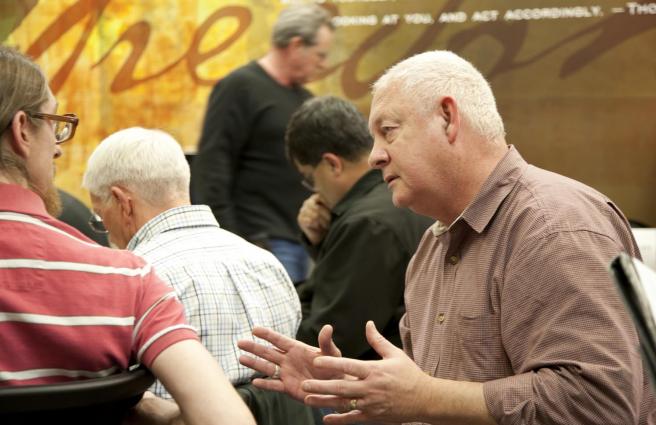 Bill Oliver of the Lab talks to one of the veterans attending a workshop at Las Positas College. Photos by Jacqueline McBride/LLNL 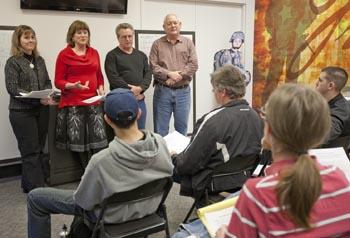 Bill Oliver is reminded daily of the time he spent in the U.S. Navy. All he has to do is look at the screen saver he installed on his Lab computer monitor -- a photo of the USS Swordfish, the submarine he served on some forty years ago.

Today, Oliver thinks about those who have served or are currently serving in the U.S. military. But, his thoughts have since turned into actions. Oliver volunteers his personal time helping veterans sharpen their skills in searching for jobs either at the Lab or elsewhere.

Oliver believes he is one of the fortunate veterans. He graduated from the University of Utah in 1974 with a bachelor's degree in math. Through the ROTC program, he was commissioned in the U.S. Navy for five years, during the Vietnam War.

The skills he learned in the service, coupled with his college degree, led him to secure several jobs after his discharge. "And, a lot had to do with the economy which was better back then," he added.

In 1996, he submitted an application after seeing a newspaper ad for an experienced control systems worker at LLNL. Today, Oliver works in the Lab's Computation Directorate as a software quality engineer.

Last year, he saw a brochure about joining the American Legion. "I realized that I was not doing any kind of community service," he said. "That was the catalyst for me to start thinking about what I could to do to help our veterans."

Oliver learned that despite the fact that veterans have many skills, and the experience that makes them excellent hires, their unemployment rate is 12 percent.

To find out more about the Laboratory's involvement in hiring veterans, he wrote a letter to 'Ask the Director' in Newsline . "I share your commitment," then Lab Director George Miller answered, encouraging Oliver to work with Strategic Human Resources Management (SHRM) and explore ways to recruit veterans to the Lab.

"The response I received was very positive," Oliver said about Miller's answer. "It made me proud to work here."

Oliver created a PowerPoint presentation that highlights job-seeking tips. He is in touch with several organizations, as well as Las Positas College where many local veterans are currently enrolled.

He also is partnering with Bethany McCormick, Michele Michael, and U.S. Air Force veteran Lee Bennett, all members of the SHRM staff who together volunteer their time to present a series of workshops on resume writing, interviewing and social networking. These sessions have been conducted off-site, on Saturdays, in collaboration with the Pleasanton VFW Post 6298 and American Legion Post 237, and held at the Pleasanton Veterans Memorial Building with the help of Patrick Leary. Additional sessions have been conducted at Las Positas College on weekday evenings.

So far, five veterans have attended the Pleasanton workshops and subsequently have applied for positions at the Lab.

"We don't give veterans enough credit for the assets they bring when they come home," Oliver said. When he returned from his service in the U. S. Navy in the 1970s, Oliver remembers that many Vietnam veterans were not accepted or well respected. "I want to show today's veterans they are valued," he said.

Veteran interns get taste of 'dream' jobs at LLNL