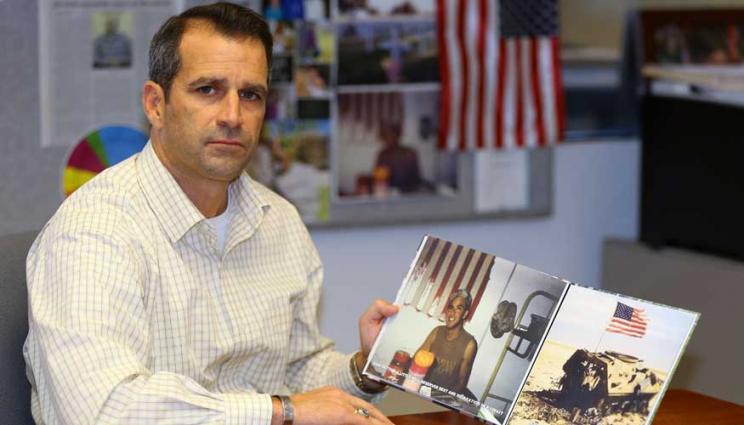 Following the loss of his brother, veteran Shaun Stephenson, division leader of Training and Development at Lawrence Livermore, found hope and a fire deep within himself to persevere. Photo by Carrie Martin/LLNL.

"I was operating in the theater in late January of 1991, preparing for the challenges that lay ahead with an unforeseen enemy," Shaun Stephenson recalled. "Little did I know that one of those challenges would be the loss of my brother."

Stephenson, from Bountiful, Utah, was 19 years old when he stepped on desert soil for the first time. He had one mission in mind - to serve his country. It was this pivotal moment that altered the course of his life forever. But through tragedy, he found hope and a fire deep within himself to persevere.

Military life was in his genes. His family carries a long lineage of service. Both of Stephenson's grandfathers served in World War II, one during the invasion of Pearl Harbor on a naval vessel, the other in Burma with the Army. His grandmother was one of the first Navy Waves serving domestically. His father served in Vietnam with the First Marine Division and later with the 19th Special Forces Group in the Army. Theirs was a patriotic household, focused on strong character and grounded in faith. He grew up very close to his brother Dion, who was just two years older. He idolized him and followed him in many aspects of life, so it was natural for Stephenson to follow in Dion’s footsteps and commit to the U.S. Marine Corps. Dion enlisted in 1987 and Shaun followed in 1989.

It was 1990, and there was trouble in the Middle East. The brothers knew little about Kuwait, other than its innocent people were being brutally attacked by Iraqi forces sent in by the Iraqi dictator Saddam Hussein. With conflict escalating, both brothers were sent to the Middle East.

The brothers were serving the same cause, but with different military units. Dion’s assignment, dedicated to the mission to liberate Kuwait, took him to the frontlines of Kuwait with the 3rd Light Armored Infantry Battalion near Al-Wafran, right into the Battle of Khafji. Shaun was with his unit, the 1st Reconnaissance Battalion conducting amphibious operations to the south with the 15th Marine Expeditionary Unit.

On Jan. 29, 1991, the first day the coalition forces were deployed forward, Dion was killed by friendly fire in the heat of the Battle of Khafji. He was one of the first American casualties of Operation Desert Storm.

"I will never forget the eerie feeling that came over me that dreadful night as we heard over the radio that we had incurred casualties in the battle ensuing," Stephenson said. When my commander shared with me the terrible news that my brother had been killed, I went into a rage asking why my brother was taken from me."

Stephenson’s life and the lives of his family were changed forever that day.

With Dion’s death in the deserts of Kuwait, Stephenson accompanied his brother’s body home to his family on Feb. 5 (Shaun’s birthday), with a new mission: To fulfill a pact the pair had made prior to deployment. They agreed that should either one perish, the other would spread the other’s ashes while parachuting. Stephenson fulfilled that promise to his brother with close friends of Dion’s over Drop Zone Basilone on Camp Pendleton. "It was extremely difficult, but my responsibility," he said. "I held Dion on my chest, cut open the bag, and his ashes rushed past me through my chute and into the air."

"Dion’s death brought initial grief, but was quickly followed by a passion for living life with purpose," Stephenson said. "For me, Dion has inspired me to be more than I thought I could be. He made me appreciate life and live more for others than I ever had. He inspired a passion in me to serve those less fortunate and most notably to provide direction and guidance to youth and young adults through strong character and leadership." 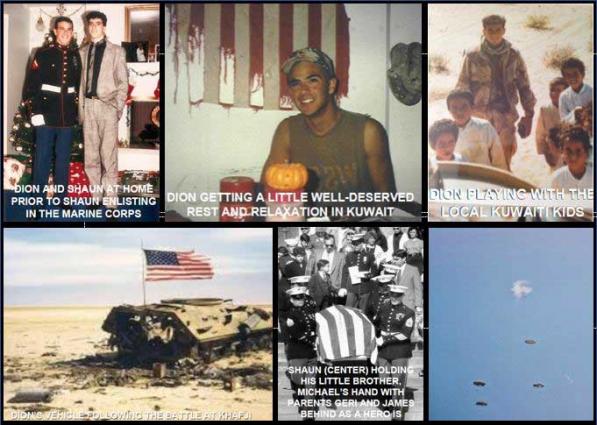 Stephenson’s parents struggled immensely with the death of their oldest son. Over time they have healed and have since found strength in his passing. In the words of their father, James, "Dion was willing to stand up for people in a country he knew nothing about."

His legacy lives on daily in their lives. An example is their mother Geri’s commitment and contribution to the Gold Star Mother’s organization. She enjoys serving through support for other mothers in coping with devastating tragedy.

Through this terrible loss, several doors were opened for Stephenson. He met president George H.W. Bush and was given the opportunity to fulfill his childhood dream of entering the United States Naval Academy, where he played football as a wide receiver.

"The military taught me many things," Stephenson said. "That life is fragile and needs to be embraced and appreciated. Life with true purpose means putting others' needs before your own. And finally, that there is nothing stronger than the will, passion and desire of a volunteer."

Now he works as the division leader of Training and Development within the Strategic Human Resources Management Directorate at Lawrence Livermore National Laboratory. He also gives back through youth outreach, and has taught character development for more than 20 years.

The family also offers scholarships to high school seniors in their hometown of Bountiful, Utah, at Woods Cross High School. Several years ago, a student who won the scholarship introduced the family to her father, who was putting together a 25th anniversary commemorative book and documentary, "The Liberation of Kuwait: Honoring the Veterans of Desert Storm," a cause near and dear to Stephenson's heart.

"The book and the documentary were very professional and accurately done, reflecting the incredible story of the strength of the human spirit when we work together for the betterment of mankind and society," Stephenson said.

Through this connection, a new mission was born: To get a free copy of this book to all 750,000 Gulf War veterans throughout America, as well as stock 80,000 libraries nationwide.

Stephenson is now partnering with the company, "StoryRock, Remember My Service," to educate people about this book and irs accompanying documentary and to seek support to get both in the hands of veterans everywhere.

Through this partnership, Stephenson had the opportunity to return to Kuwait in October. This mission was to meet with Kuwaiti dignitaries to gain support for the project.

"I was initially apprehensive, as it had been 17 years since being in the theater from my last deployment, and painful memories follow me there from 27 years prior," Stephenson said. "However, apprehension soon turned to duty as I found my mission very clear: I was honored to share my family story of sacrifice with key Kuwaiti dignitaries, ensuring every effort was made to fund this project, so all Gulf War veterans could cherish, as I have, the experience of reading the commemorative book and viewing the documentary. In addition, educating all on the orchestration between 35 countries coalesced to right a wrong, working jointly with a shared conscience as the United Nations never had before."

Stephenson recalled that Kuwait was much different in 2017 than it was 27 years ago. It was thriving, children were playing outside his window in a private school on an elevated turf field while parents dropped off their children for the day. He felt whole knowing that the cause was worth the ultimate sacrifice. His brother did not die in vain. He died fighting for a cause he believed in.

This project, honoring America’s Gulf War veterans, continues to have the backing of top U.S. veterans and military officials, including senior officials in the U.S. government. They are now looking to Kuwait to respectfully finish the project by fully funding what the Kuwaiti government began two years ago.

The cumulation of events following Dion’s death were healing for Stephenson. "I am certain my brother would be proud of how his family has ensured Dion is not forgotten," he said. "It was an honor to be his brother, it was an honor to have served with him, to deliver his remains, to have fulfilled my promise to him and to ensure this event in history is never forgotten.

"It’s equally an honor to have served our country," Stephenson added. "It means I am part of a brotherhood and sisterhood of men and women that put others needs before their own. It means being grounded in character through integrity, honesty, loyalty and etiquette. It means leading through sacrifice, humility, accountability and courage. There is no greater community."

For more information about the veterans of Desert Storm, contact usna18 [at] yahoo.com (Stephenson).