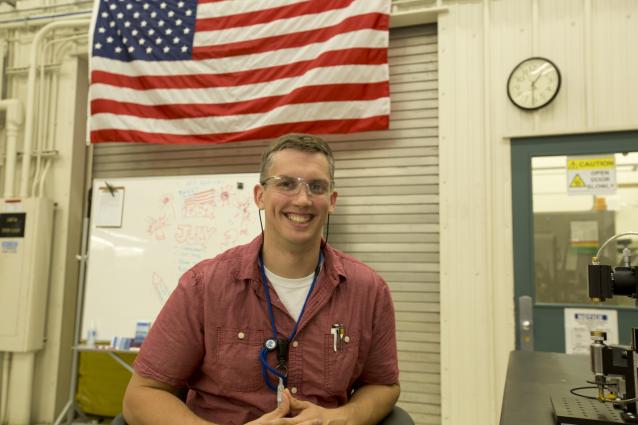 Military veteran Eric Browy has overcome a slew of physical and personal obstacles in his pursuit of a career in research and development. He is one of many graduate students working at the Lawrence Livermore National Laboratory this summer. Photo credit:  Jamie Douglas/LLNL

(Editor's note: Among an outstanding group of summer students currently at the Lab is an engineering student who has overcome several significant obstacles. Eric Browy was wounded while serving our country in Iraq, and is currently working on a master's degree in optical science and engineering at the University of North Carolina, Charlotte. He shares his story about overcoming many life challenges including the loss of friends, his brother, and his leg to become a successful athlete and student.)
_________________

Eric Browy enlisted in the Army in June 2002 after struggling academically in college. He was deployed to Iraq twice and in March 2006, he was seriously injured, requiring him to be sent to the Walter Reed Army Medical Center where he spent nine months rehabilitating from the loss of his leg and adjusting to life with a new prosthesis. He had to learn how to walk again, and during this time of readjustment and rehab, Browy was diagnosed with post-traumatic stress disorder and depression.

Browy was medically retired from the Army and returned home. The transition to civilian life was tough, and made more difficult by the adjustment to his physical challenges. While fighting these problems, Browy gained weight and became more and more withdrawn. Nevertheless, he started back at school studying mechanical engineering, and while he struggled with the transition into academic life, he managed to pass his classes.

"One day [college] just clicked for me, and I was able to handle all of the things in school where I had previously been struggling," Browy said.

He decided to add a second B.S. degree in physics, and then began graduate school studying optical science and engineering.

"I needed to get my act together," he said.

He began to work out even though it was challenging and slow at the start. He eventually gained enough confidence to join group fitness classes, where friends encouraged him to compete in his first triathlon.

"I loved it. It ignited the competitive fire that had smoldered to ash, and I became passionate about fitness again," Browy said. "The craziest thing was happening at the same time, and it caught me by surprise: I was becoming happy again. I could enjoy time with others and I looked forward to getting out and running with friends and meeting people at races."

Eventually he found he no longer needed medication, and he reconnected with friends and family, continuing on the journey of fitness and competition. Since then he has completed an ultra-marathon in Ireland, was part of a 100K relay team and finds daily achievements in Crossfit training.

Browy is adding to his studies in optical science with an internship in the Defense Technologies Engineering Division, assisting with metrology and calibration of an optical capability maturity model, and he aims to design and build a robust foil measurement machine using two confocal microscope objectives.

"[I hope to] learn a lot and really have a chance to better understand how the knowledge I have gained throughout my education is actually used in the workplace," Browry said.

Browry is now the proud Chapter Captain for Team Red, White and Blue Charlotte, an organization that aims to enrich the lives of America's veterans by connecting them to their community through physical and social activity. He works out six days a week, and is down to 190 pounds.

"It is what keeps me happy and allows me to sleep at night," he said. "Team Red, White and Blue's mission is so important, but not just because we aid in the transition from military service to civilian life. Team RWB is an organization that empowers you to become a leader again ... to be productive and contribute to your community. They want to give you the tools to take care of yourself and to be in a community, be active, and always remember that you have people nearby who care."

Browy attends the University of North Carolina, Charlotte, where he is completing an M.S. in optical science and engineering, and plans on continuing to a Ph.D. He is working with the Target Fabrication group at Lawrence Livermore, where he is working toward his career goal of working in an R&D position. He hopes to be "constantly challenged to think of solutions to solve meaningful problems."

Browy is an inspiration to everyone he meets and continues to excel in his educational and fitness goals. He has some great advice for other veterans in similar situations:

"In order to make the most out of life set goals to be a productive member of your community, and give back to people," he said. "We are an asset to our country, especially with our experiences, and in order for people to see past all of the negative connotations associated with veterans we need to excel, give back and keep striving to be better people."