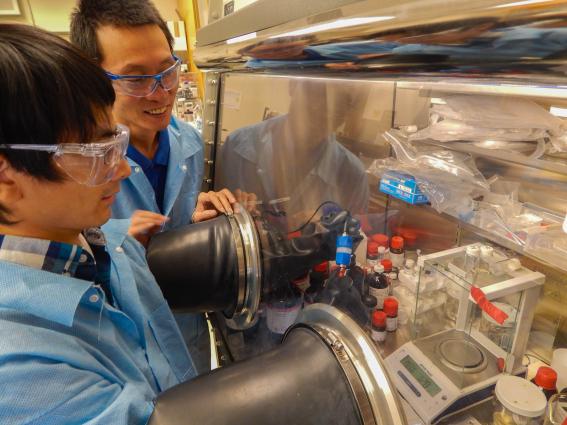 From left, LLNL postdoc Jianchao Ye works on a lithium ion battery, while Morris Wang looks on. The two are part of a team studying the use of hydrogen for longer-lasting batteries. Photos by Julie Russell

Lawrence Livermore National Laboratory scientists have found that lithium ion batteries operate longer and faster when their electrodes are treated with hydrogen.

Lithium ion batteries (LIBs) are a class of rechargeable battery types in which lithium ions move from the negative electrode to the positive electrode during discharge and back when charging.

The growing demand for energy storage emphasizes the urgent need for higher-performance batteries. Several key characteristics of lithium ion battery performance -- capacity, voltage and energy density -- are ultimately determined by the binding between lithium ions and the electrode material. Subtle changes in the structure, chemistry and shape of an electrode can significantly affect how strongly lithium ions bond to it.

Through experiments and calculations, the Livermore team discovered that hydrogen-treated graphene nanofoam electrodes in the LIBs show higher capacity and faster transport.

"These findings provide qualitative insights in helping the design of graphene-based materials for high-power electrodes," said Morris Wang, an LLNL materials scientist and co-author of a paper appearing in Nov. 5 edition of Nature Scientific Reports.

Commercial applications of graphene materials for energy storage devices, including lithium ion batteries and supercapacitors, hinge critically on the ability to produce these materials in large quantities and at low cost. However, the chemical synthesis methods frequently used leave behind significant amounts of atomic hydrogen, whose effect on the electrochemical performance of graphene derivatives is difficult to determine.

Yet Livermore scientists did just that. Their experiments and multiscale calculations reveal that deliberate low-temperature treatment of defect-rich graphene with hydrogen can actually improve rate capacity. Hydrogen interacts with the defects in the graphene and opens small gaps to facilitate easier lithium penetration, which improves the transport. Additional reversible capacity is provided by enhanced lithium binding near edges, where hydrogen is most likely to bind. 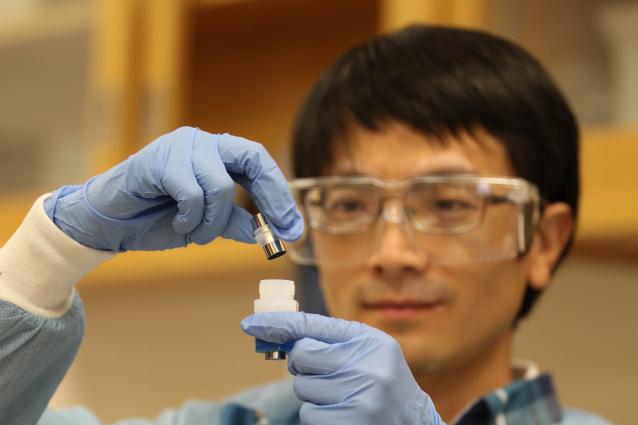 "The performance improvement we’ve seen in the electrodes is a breakthrough that has real world applications," said Jianchao Ye, who is a postdoc staff scientist at the Lab’s Materials Science Division, and the leading author of the paper.

To study the involvement of hydrogen and hydrogenated defects in the lithium storage ability of graphene, the team applied various heat treatment conditions combined with hydrogen exposure and looked into the electrochemical performance of 3-D graphene nanofoam (GNF) electrodes, which are comprised chiefly of defective graphene. The team used 3-D graphene nanofoams due to their numerous potential applications, including hydrogen storage, catalysis, filtration, insulation, energy sorbents, capacitive desalination, supercapacitors and LIBs.

The binder-free nature of graphene 3-D foam makes them ideal for mechanistic studies without the complications caused by additives.

"We found a drastically improved rate capacity in graphene nanofoam electrodes after hydrogen treatment. By combining the experimental results with detailed simulations, we were able to trace the improvements to subtle interactions between defects and dissociated hydrogen. This results in some small changes to the graphene chemistry and morphology that turn out to have a surprisingly huge effect on performance," said LLNL scientist Brandon Wood, another co-author of the paper.

The research suggests that controlled hydrogen treatment may be used as a strategy for optimizing lithium transport and reversible storage in other graphene-based anode materials.