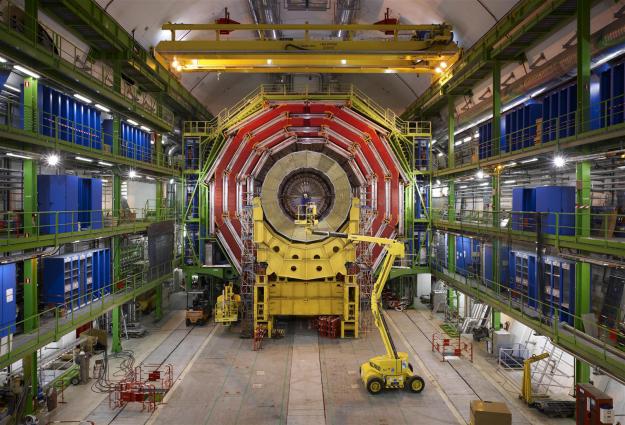 Lowering of the final element (YE-1) of the Compact Muon Solenoid (CMS) detector into its underground experimental cavern. 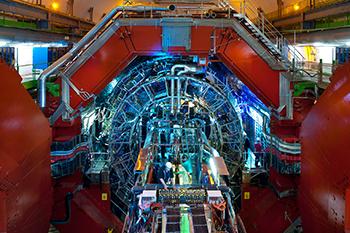 The Royal Swedish Academy of Sciences awarded the Nobel Prize in physics today to theorists Peter Higgs and Francois Englert to recognize their work developing the theory of what is now known as the Higgs field, which gives elementary particles mass.

U.S. scientists, including researchers at Lawrence Livermore National Laboratory (LLNL), played a significant role in advancing the theory and in discovering the particle that proves the existence of the Higgs field, the Higgs boson.

In the 1960s, Higgs and Englert, along with other theorists, including Robert Brout, Tom Kibble and Americans Carl Hagen and Gerald Guralnik, published papers introducing key concepts in the theory of the Higgs field. In 2012, scientists on the international ATLAS and CMS experiments, performed at the Large Hadron Collider at CERN laboratory in Europe, confirmed this theory when they announced the discovery of the Higgs boson.

Nearly 2,000 physicists from U.S. institutions -- including 89 U.S. universities and seven U.S. Department of Energy laboratories -- participate in the ATLAS and CMS experiments, making up about 23 percent of the ATLAS collaboration and 33 percent of CMS at the time of the Higgs discovery. Brookhaven National Laboratory serves as the U.S. hub for the ATLAS experiment, and Fermi National Accelerator Laboratory serves as the U.S. hub for the CMS experiment. U.S. scientists provided a significant portion of the intellectual leadership on Higgs analysis teams for both experiments.

"It is an honor that the Nobel Committee recognizes these theorists for their role in predicting what is one of the biggest discoveries in particle physics in the last few decades," said Fermilab Director Nigel Lockyer. "I congratulate the whole particle physics community for this achievement."

A majority of U.S. scientists participating in LHC experiments work primarily from their home institutions, remotely accessing and analyzing data through high-capacity networks and grid computing. The U.S. plays an important role in this distributed computing system, providing 23 percent of the computing power for ATLAS and 40 percent for CMS. The United States also supplied or played a leading role in several main components of the two detectors and the LHC accelerator.

"The discovery of the Higgs boson is a crowning achievement for physics," said Bill Goldstein, principal associate director for Science and Technology at LLNL. "Like most physics labs, we participate in one of the two detector collaborations at the LHC that made the discovery, and continue to be part of the international community working to extend our understanding of the universe. We join in congratulating the winners of this year's Nobel Prize, and the international particle physics community as a whole."

Lawrence Livermore joined the Compact Muon Solenoid (CMS) experiment in 2005. LLNL contributions include: assisted in development of the trigger system that captures Higgs and other phenomena for the CMS experiment; and a leadership role in developing the software that reconstructs raw data into the physics objects that form the basis of all analyses. Lab researchers are now working on a novel physics analysis and leading a detector upgrade that can discover new particles and reveal information about the Higgs.

Support for the U.S. effort comes from the U.S. Department of Energy Office of Science and the National Science Foundation.

The discovery of the Higgs boson at CERN was the culmination of decades of effort by physicists and engineers around the world, at the LHC but also at other accelerators such as the Tevatron accelerator, located at Fermilab, and the Large Electron Positron accelerator, which once inhabited the tunnel where the LHC resides. Work by scientists at the Tevatron and LEP developed search techniques and eliminated a significant fraction of the space in which the Higgs boson could hide.

For more information about U.S. involvement in Higgs, see the US/LHC Website.