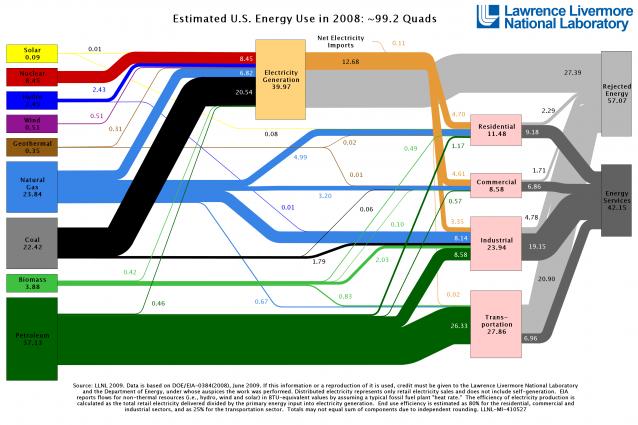 Distributed electricity represents only electricity sales and does not include self-generation. EIA reports flows from non-thermal resources (i.e., hydro, wind and solar) in BTU-equivalent values by assuming a typical fossil fuel plant "heat rate." The efficiency of electricity production is calculated as the total retail electricity delivered by the primary energy input into electricity generation. End use efficiency is estimated at 80% for the residential, commercial and industrial sectors, and as 25% for the transportation sector. Totals may not equal sum due to independent rounding.

LIVERMORE, Calif. - Americans used more solar, nuclear, biomass and wind energy in 2008 than they did in 2007, according to the most recent energy flow charts released by the Lawrence Livermore National Laboratory. The nation used less coal and petroleum during the same time frame and only slightly increased its natural gas consumption. Geothermal energy use remained the same.

Energy use in the industrial and transportation sectors declined by 1.17 and 0.9 quads respectively, while commercial and residential use slightly climbed. The drop in transportation and industrial use — which are both heavily dependent on petroleum — can be attributed to a spike in oil prices in summer 2008.

Last year saw a significant increase in biomass with the recent push for the development of more biofuels including ethanol.

"This is a good snapshot of what's going on in the country. Some of the year-to year changes in supply and consumption can be traced to factors such as the economy and energy policy," said A.J. Simon, an LLNL energy systems analyst who develops the energy flow charts using data provided by the Department of Energy's Energy Information Administration.

Simon said the increase in wind energy can be attributed to large investments in wind turbine technologies over the last few years as well as better use of the existing turbines.

"There's an incentive to operate as much as possible," Simon said. "It's a smart thing to do. You can't earn revenue by selling electricity when you're down."

Many years of experience have allowed nuclear operators to optimize plant reliability on short maintenance cycles.

The chart also shows the amount of energy rejected by the United States. Of the 99.2 quads consumed, only 42.15 ended up as energy services. Energy services are "things that make our lives better," Simon said. "That's the energy that makes your car move and that comes out of your light bulb."

The ratio of energy services to the total amount of energy used is a measure of the country's energy efficiency. The remainder, explained Simon, "is simply rejected. For example, some rejected energy shows up as waste heat from power plants."

"I'm really excited about the renewed push for energy efficiency in this country," he said. "Because once that energy is rejected, it's no longer useful.