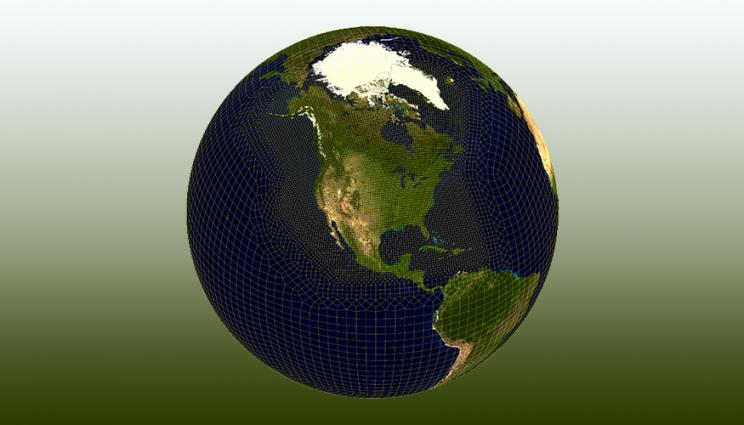 A model of the North American Regionally Refined Model grid showing the grid refinement that includes a 100-kilometer grid globally and 25 kilometers over North America.

A new version of the Energy Exascale Earth System Model (E3SM) is two times faster than its earlier version released in 2018.

Earth system models have weather-scale resolution and use advanced computers to simulate aspects of Earth’s variability and anticipate decadal changes that will critically impact the U.S. energy sector in coming years.

Version 2 of the Energy Exascale Earth System Model (E3SM2) is significantly faster than its predecessor and was released to the broader scientific community on Sept. 28. The E3SM project is supported by the Department of Energy's Office of Science in the Biological and Environmental Research Office.

“E3SMv2 is faster and better than E3SMv1,” said Lawrence Livermore National Laboratory (LLNL) atmospheric scientist Chris Golaz. “It’s approximately twice as fast on identical machines, four times as fast on machines we have now, compared to what we had for E3SMv1. From one generation to another, earth system models typically become better but also quite a bit slower, so faster and better is significant.”

The Earth, with its myriad interactions of atmosphere, oceans, land and ice components, presents an extraordinarily complex system for investigation. Earth system simulation involves solving approximations of physical, chemical and biological governing equations on spatial grids at resolutions that are as fine in scale as computing resources will allow.

“E3SMv2 allows us to more realistically simulate the present, which gives us more confidence to simulate the future,” said David Bader, LLNL scientist and lead of the E3SM project. “The increase in computing power allows us to add more detail to processes and interactions that results in more accurate and useful simulations than the previous version."

The E3SM project reliably simulates aspects of earth system variability and projects decadal changes that will critically impact the U.S. energy sector in the future. These critical factors include a) regional air/water temperatures, which can strain energy grids; b) water availability, which affects power plant operations; c) extreme water-cycle events (e.g. floods and droughts), which impact infrastructure and bio-energy; and d) sea-level rise and coastal flooding, which threaten coastal infrastructure.

In particular, the E3SMv2 improves the representation of precipitation and clouds. “Specifically, how clouds change in a warmer climate is much more realistic,” Golaz said.

In addition, the resolution has been refined due to more powerful computers. There are now two fully coupled configurations: a 100-kilometer (km) globally uniform resolution atmosphere and a regionally refined model (RRM) resolution with 25 km over North America and 100 km elsewhere. The refined mesh configuration is particularly well-suited for DOE applications.

“Thanks to the performance improvements, the RRM configuration of E3SMv2 runs as fast as E3SMv1 did in its standard resolution configuration (100 km) a few years ago. We are essentially getting the much higher resolution for ‘free,’” Golaz said.