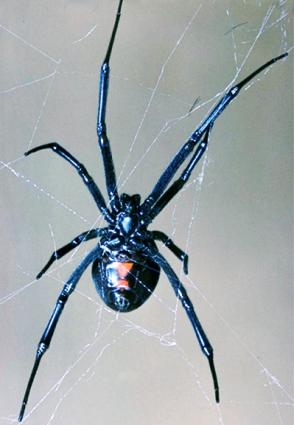 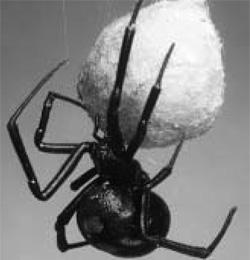 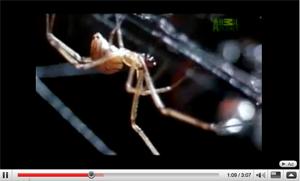 Some think the black widow spider’s habitat is "under quilts on a bed" or "on a doorknob about to be touched and turned." With black widow spiders haunting the shadows and "All Hallows’ Eve" just past, perhaps it’s time to dispel some myths surrounding this striking spider.

There are several species of black widow in North America. The western black widow (Latrodectus hesperus) is common from British Columbia to Mexico and in the Rocky Mountains.

The spin on their web habits

Contrary to popular belief, the black widow spider prefers an outdoor, terrestrial habitat. The black widow’s web is spun from strong threads and is found, along with the spider, in dark sheltered spots on or close to the ground. The black widow finds crevices, cracks and holes in diverse places. Overturn a rock, peek into a ground squirrel’s burrow, let your eyes adjust to the shadowy crevices of a wood, soil or rubble pile and this predator may lie in wait.

While the adult female is the familiar shiny jet-black color with its unmistakable hourglass-shaped marking on its underside, you are not likely to recognize the male as a black widow.  Male western black widows are much smaller than females and brown in color. While myth may associate only a red hourglass marking on the underbelly of a female black widow, this marking’s color may range from yellowish to orange to red. The male’s abdomen has black and white stripes on the sides. Newly hatched spiderlings are usually white or reddish-white in color (check out Peter Bryant’s black widow photo gallery ).

The fury of female wrath

Dispelling myths for the black widow spider will not include the toxicity of the adult female’s venom. This venom is highly potent and an unfortunate bite exposes its victim to a powerful neurotoxin (for safety tips, see OSHA’s factsheet ). Yet, it is a myth that a black widow female seeks to bite people and purposely lies in wait on that doorknob or in the bed. This timid spider will only bite if inadvertently pressed against a person. It leaves a characteristic two-puncture bite mark, but is rarely fatal.

Another myth associated with the black widow’s name and charisma is that the female will eat her mate after mating. This rarely occurs with the western black widow, although it makes for great footage (check out Ultimate Animal Dads YouTube ) and contributes to its fearsome reputation. Rather, after mating in spring or summer, the female lays eggs in silk sacs (25–250 or more eggs). Four weeks later, the spiderlings hatch and extend threads that allow them to drift or "balloon" on air currents. After undergoing several molts, the spiderlings reach maturity in two to four months. Note that the male may mate again, since he typically makes it through the first time.

Dogs have long provided comforting companionship, but why not consider the black widow spider, too? This voracious spider eats insects considered human pests. These pests include flies, mosquitoes, locusts, cockroaches, grasshoppers, beetles and caterpillars. While this "best buddy" spider may not chase anyone big from the yard, it does eat many small critters that do us much harm. It helps protects us from malaria, destruction of crops and defoliation of plants and trees.