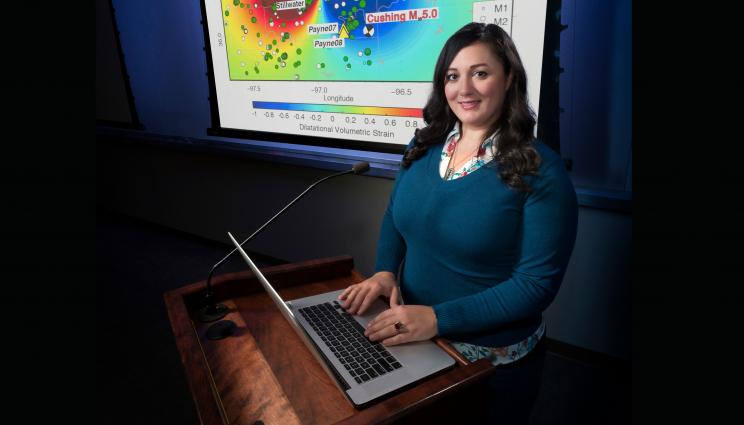 Unlocking the secrets of hidden earthquakes

"In high school, I put up glow-in-the-dark constellations in my bedroom," she said, "along with a 3D display of the planets in exact formation. I made the ceiling fan the sun, complete with solar flares."

It was no surprise, then, when the Livermore-born Kroll chose to pursue an aerospace engineering degree at Cal Poly Pomona, with hopes to design spaceships and satellites. But after three years, she was restless spending day after day solving math problems and sitting in front of a computer. She switched her major to geology, which allowed her more time outside exploring rocks and mountains. But it didn’t take long before Kroll was back in a classroom learning advanced math, motivated by an emerging curiosity about the Earth’s subsurface after taking introductory classes in seismology and geophysics.

After completing her undergraduate degree, Kroll spent a year in environmental consulting, but found that industry wasn’t a good fit. Soon afterward, she enrolled in the master’s program in observational seismology (which uses earthquake data to determine the physical characteristics of rocks and the Earth’s subsurface) at the University of California, Riverside (UCR). During this time, she worked with Elizabeth Cochran and installed seismometers to collect data from aftershocks (smaller earthquakes that occur after a larger mainshock) near the 2010 M7.2 El Mayor-Cacapah earthquake in Baja California. They computed precise locations of these aftershocks to identify the subsurface fault structure in the region — some faults for the very first time. In addition, they used this data to investigate the connection between the rate of aftershocks and stress changes (deformation within the rock caused by slip during an earthquake) in the Earth’s crust. Understanding how earthquakes respond to changes in stress allows seismologists to produce forecasts that address the potential hazards of earthquakes to infrastructure and the public.

Kroll found that she was interested in researching the origins of earthquakes further, so she decided to continue her education at UCR as a doctoral student in earthquake physics, a discipline that seeks to understand the physical properties and mechanisms leading to earthquake generation. She specialized in computational seismology and the numerical modeling of earthquakes, methods used to determine the relationship between inputs (such as the injection of fluids into the earth’s crust) and seismicity. Such work involves building computer models of the material properties and fault structure of a site, then testing the model to see how seismicity is affected by a range of inputs. Strong programming and math skills also are required — ironically, Kroll says, the same competencies that made her decide not to pursue a career as an aerospace engineer.

In February 2016, two months after receiving her Ph.D., Kroll joined the Atmospheric, Earth and Energy Division’s (AEED) Seismology Group at LLNL. A major part of Kroll’s research portfolio at the Lab has been integrating principles of geomechanics (the science of how geologic material deforms) and seismology to model induced seismicity, earthquakes caused by an external stress imposed on the subsurface from anthropogenic activities (such as hydrocarbon extraction, reservoir impoundment, mining and fluid disposal).

"Livermore has an outstanding geomechanics group and I wanted to learn from them," said Kroll, who adds that the group is one of the few in the world drawing from both seismology and geomechanics expertise in their induced seismicity research. "Working with group leader Josh White and the other postdoc mentors helped me improve my skill set in advanced research methods for geomechanics, which includes understanding the deformation and stress changes that occur in rocks when fluids are injected into them."

In particular, Kroll has spent much of her time examining the risks of induced seismicity at geologic carbon dioxide (CO2) storage sites for the DOE-funded National Risk Assessment Partnership (NRAP), a multi-institutional and multidisciplinary project focused on identifying risks associated with large-scale carbon storage. LLNL is one of five national labs participating in the partnership, and LLNL’s NRAP team won an R&D 100 award for its work developing software packages to assess the environmental risks at such storage sites.

One method that could control or mitigate earthquakes associated with geologic carbon storage, Kroll said, is active pressure management — a process that pumps CO2 into a saline reservoir, then pumps out the saltwater from the reservoir to reduce pore pressure (the pressure from fluid held within gaps of rocks in the earth’s subsurface). By coupling two different computer codes — that is, taking one code that solves for the pore pressure change due to injection and using those results in an earthquake simulation code — the team hopes to develop a best practice guide for carbon storage operators.

"The research could also help inform the U.S. Environmental Protection Agency’s regulations on carbon storage," Kroll said, "by identifying the threshold level of injected fluids that will maintain the pressure built up in the subsurface at a certain level and not lead to induced seismicity."

As the LLNL principal investigator for a $2.5 million, four-year DOE grant, Kroll and her team will partner with the Electric Resource Power Institute to examine changes in the subsurface stress field due to wastewater disposal in Kansas, Oklahoma and California. The study, which will use non-invasive and cost-effective advanced seismological methods (matched filter catalog development, ambient noise correlation, the virtual seismometer method and shear wave splitting) to characterize the stress field, also involves collaboration with the U.S. Geological Survey and the Oklahoma Geological Survey.

Having converted from a postdoc to a staff scientist in November, Kroll reflects positively about her experience at LLNL thus far. "Both my mentors and AEED trusted me to take on new levels of responsibility that helped me grow into a scientist who can lead research teams, as well as one who can effectively communicate about her work," she said. "I’ve been able to transition from a student to a professional."