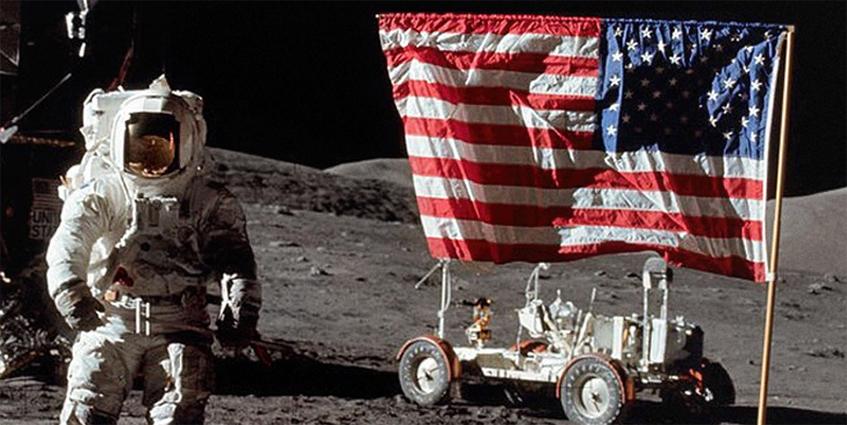 Astronaut and geologist Harrison Schmitt landed on the moon with Eugene Cernan on Dec. 11, 1972, and began collecting rocks. Lawrence Livermore is studying rocks from that Apollo 16 mission. Photo courtesy of NASA.

A team of Lawrence Livermore National Laboratory (LLNL) scientists has challenged the long-standing theory that the moon experienced a period of intense meteorite bombardment about 3.8 billion years ago, when the first forms of life appeared on Earth.

This theory is known as the Late Heavy Bombardment and is thought to have resulted from disturbance of the asteroid belt due to the outward migration of the giant planets. The Late Heavy Bombardment hypothesis was predicated on evidence from numerous impacts on the lunar surface around 3.8 billion years ago and suggested that there were essentially no prior impacts.

However, Lawrence Livermore cosmochemists have examined a rock collected during the Apollo 16 mission in 1971 and found that a very large impact occurred around 4.3 billion years ago, thus challenging the Late Heavy Bombardment hypothesis. The research appears in the Journal of Geophysical Research.

By looking at a previously unstudied Apollo 16 lunar rock, the cosmochemists discovered that the sample came from deep in the lunar crust, solidifying at a depth greater than 20 kilometers.

Earth’s moon is believed to have formed when a Mars-sized body slammed into Earth and caused a piece of what was then Earth to separate from the planet and form the moon. The moon originally was a lunar magma ocean before it congealed into what we now know as Earth’s moon. Eventually the magma on the outer layers started to solidify.

The Livermore team applied numerous dating techniques to the samples that are based on the natural decay of long-lived isotopes such as potassium-40 to argon, rubidium-87 to strontium and samarium-147 to neodymium. Each of these geologic clocks record the age when a sample was at a specific temperature between 300 degrees Celsius to 850 degrees.

“The interesting observation is that the same 4.3-billion-year age is recorded by all isotopic systems,” said LLNL cosmochemist Naomi Marks, lead author of the paper. “This implies that large basin-forming impact events occurred on the moon 4.3 billion years ago, and that these types of events did not occur only at 3.8 billion years ago during the Late Heavy Bombardment.”

Using a scaling algorithm, the group estimated that the sample was brought to the surface 4.3 billion years ago by an impact that produced a crater on the surface at least 700 kilometers across.

LLNL partnered with a University of New Mexico team to complete this work. Other LLNL authors include Lars Borg and Bill Cassata. The work was funded by both NASA cosmochemistry grants and LLNL’s Laboratory Directed Research and Development program.