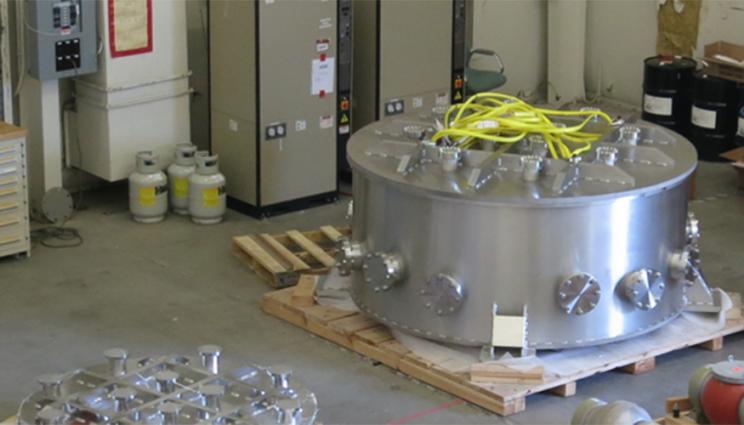 The xenon vessel and vacuum vessel for the next Enriched Xenon Observatory (nEXO) experiment was built at Lawrence Livermore National Laboratory. The experiment will search for an extremely rare nuclear process called neutrinoless double-beta decay (NDBD).

Understanding the universe through neutrinos

Determining features of the elusive particle known as a neutrino – through the observation of an extremely rare nuclear process called neutrinoless double-beta decay (NDBD) -- could provide a glimpse into the nature of the universe during the earliest moments of the Big Bang.

As part of an international collaboration, Lawrence Livermore National Laboratory (LLNL) scientists have proposed the next Enriched Xenon Observatory (nEXO) experiment, a candidate for the next generation of NDBD experiments. If discovered, NDBD would demonstrate the existence of a new elementary particle, the Majorana fermion. This discovery could reshape the standard model of particle physics and lead to a better understanding of neutrinos and their impact on the evolution of the universe. The research behind the experiment appears in the journal Physical Review C. 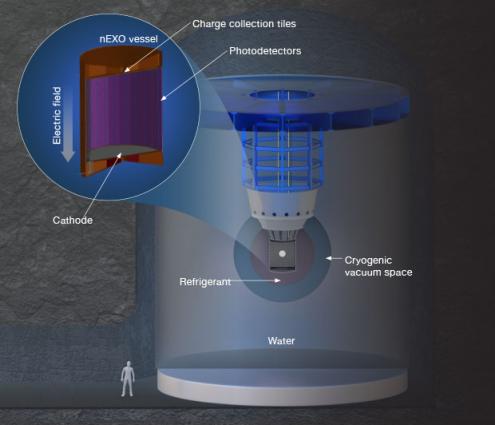 NDBD is a theoretical process with a half-life more than 1016 times the age of the universe and could help determine whether neutrinos are their own antiparticles and explain why, from equal parts of matter and antimatter, the universe evolved into its current matter-dominated state.

"A competitive 2-order-of-magnitude increase in NDBD half-life sensitivity over current experiments is possible" using the nEXO detector, said LLNL scientist Samuele Sangiorgio, lead author of the paper. "We now have great confidence in nEXO’s design and approach, and we will be able to measure this rare event."

Scientists expect to see only about a dozen decays in a decade-long experiment. Because of this very low signal rate, false signals from background radiation and cosmic rays must be suppressed as much as is feasible. "Understanding the backgrounds is key to a make a convincing case for a NDBD experiment, and indeed is one of the main aspects of the paper," Sangiorgio said.